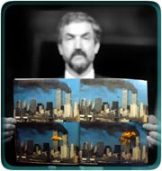 “Two days after British authorities broke up an alleged plot to blow up multiple aircraft over the Atlantic Ocean, the ‘moderate’ Muslim establishment in Britain published an aggressive open letter to Prime Minister Tony Blair.

“It suggested that Mr. Blair could better fight terrorism if he recognized that the current British government policy, especially on ‘the debacle of Iraq’, provides ‘ammunition to extremists’. The letter writers demanded that the prime minister change his foreign policy to ‘make us all safer’. One prominent signatory, the Labour member of Parliament Sadiq Khan, added that Mr. Blair’s reluctance to criticize Israel increased the pool of people whom terrorists can recruit.

“In other words, Islamists working within the system exploited the thwarted Islamist terror plot to pressure the British government to implement their joint wishes and reverse British policy in the Middle East. Lawful Islamists shamelessly leveraged the near death of thousands to forward their agenda.”

It’s only a few weeks since Pipes wrote, in response to the adoption of the term “Islamic fascists” by George W. Bush: “The use of Islamic fascists should be seen as part of a decades-long search for the right term to name a form of Islam that is recognizably political, extreme, and often violent…. While Islamic fascists beats terrorists, let’s hope that a better consensus term soon emerges. My vote is for Islamists.”

So, according to Pipes’ warped reasoning, Sadiq Khan MP and the alleged plotters of terrorist atrocities are all proponents of “a form of Islam that is recognizably political, extreme, and often violent” – it’s just that Sadiq Khan pursues his objectives “within the system”.