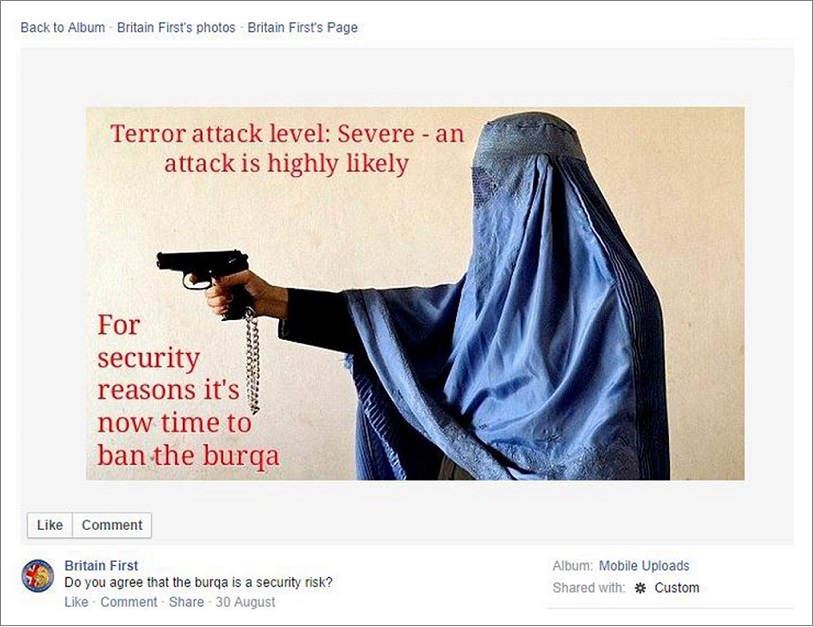 A photographer has described her horror after being alerted to a picture she said she took of Afghanistan’s first female police officer being used to promote banning the burka by Britain First.

Canadian Lana Slezic alleges that a picture she took of Lieutenant Colonel Malalai Kakar, who was shot dead by the Taliban in 2008, has been posted to Facebook without permission by Britain First.

She said she was alerted by various media outlets that the photo was being used in such a manner on Friday.

She claims that the image of Lt.Col Kakar in a burka and holding a gun has been edited with a caption that reads: “Terror attack level: severe – an attack is highly likely. For security reasons it’s now time to ban the burqa.”

Lt. Col. Kakar was a high profile policewoman who fought for women’s rights and against extremism and terrorism until she was assassinated on her way to work at a Kandahar police station.

Ms Slezic says her memory has been “desecrated” by Britain First and the Australian Palmer United senator Jacqui Lambie, who shared Britain First’s post on her Facebook wall.

“Here’s a woman whose life was taken by terrorists, extremists in the most horrific way,” she told the Australian Associated Press. “She died in front of her son, shot to death outside her home on her way to work.

“Everything she stood for, everything she fought for, for herself, her family, her daughters and future of her country, everything has been desecrated by how Jacqui Lambie and Britain First have used this photograph.”

The image was taken at Lt. Col. Kakar’s office in 2004 as part of a series showing her in different aspects of her life. Ms Slezic, who lives in Toronto, told The Independent Lt. Col. Kakar would be in uniform when she was in the office, but would be expected to wear the burka when she went outside.

“I took a portrait of her in the office and I photographed her at home and in the field working, and when she was dealing with women who would come to her office with their issues, because she was there for women all the time. Women knew they could turn to her with issues of rape, domestic violence forced marriage.”

She described the image as “inflammatory” and said the thousands of likes and shares it had gained on Britain First’s Facebook page were “disturbing”.

“It shows the message they are trying to send has spread quickly,” she said. “I was horrified because it’s a complete misrepresentation of the truth. It insults everything she stood for, it insults her and her family and suggests a story that is opposite of the truth. It is also an infringement of intellectual property.”

Ms Slezic says she emailed both Britain First and Jacqui Lambie on Friday explaining the context of the photo and asked them to remove the image from their pages.

Ms Lambie later dismissed Ms Slezic’s comments as “a gross overreaction” and the reports as “disgusting, unprofessional beat up”. In a Facebook post, she claimed Ms Kakar “would have been the first to agree with my call to ban the burka”.

“Far from desecrating her memory, my Facebook post honours her and the deadly struggle against brutal thugs and extremists,” she wrote. “As a police officer she would have known how easy it was to conceal weapons or bombs capable of killing large numbers of innocents under a burka. She would have known how much safer it would be in public if the burka was banned.”