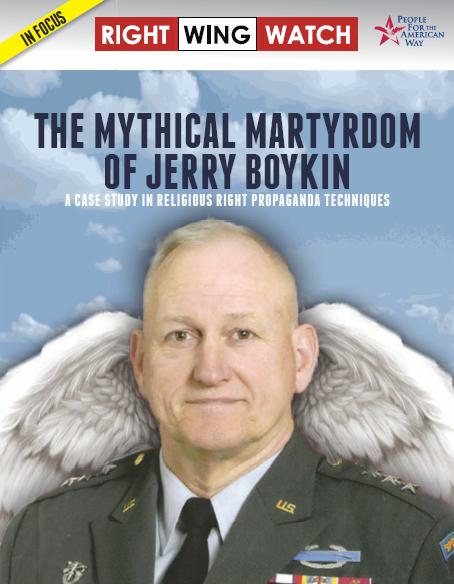 A new People For the American Way Right Wing Watch: In Focusreport identifies the techniques used by Religious Right leaders to portray themselves as victims of an assault on religious liberty.

The report, The Mythical Martyrdom of Jerry Boykin, examines the anti-Muslim extremism of Retired Lt. Gen. Boykin that derailed an offer to speak at West Point Military Academy, as well as the tactics he employs to legitimize his own religious and political agenda.

“Lt. Gen. Boykin’s claim that Muslims have no First Amendment rights and that the United States is at war with Islam are contrary to basic American values,” said Michael Keegan, President of People For the American Way. “His attacks against Muslims are so extreme he was even publicly rebuked by President George W. Bush. It is ironic that a man who so fundamentally misunderstands our Constitution’s guarantee of freedom of worship to all Americans is playing the victim of religious oppression. In reality, Boykin is just a part of the far-right effort to use the banner of religious freedom as cover for spreading fear and intolerance.”