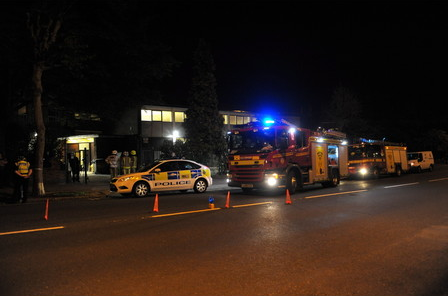 Petrol bombs were thrown inside a Grimsby mosque tonight – in front of police officers who were guarding it.

The police, fire service and two ambulances attended the building, on the junction of Weelsby Road and Legsby Avenue, at about 10pm. Two people were arrested on suspicion of arson at the scene. The building was being protected by the police because of another incident there earlier this week.

Chairman Diler Gharib described how there were people inside the mosque at the time of the petrol bomb attack, including a young family. He said:

“We had just finished our prayers and were discussing how to thank our neighbours for the support they have shown us over the past few days when we heard a bang and saw fire coming under the door. I grabbed a fire extinguisher and put it out and then two more petrol bombs hit the fire escape and the bin so I had to put those out too. Luckily the police have been monitoring the mosque since the last attack and they were able to arrest two people almost straight away.

“We have all been feeling on edge and now this has happened. It’s not just the people at the mosque we are worried about, it’s our wives, daughters and children who are out in the community. People need to realise that the people who committed the murder in Woolwich are criminals and it had nothing to do with the Muslim faith.

“I hope the people who did this tonight will be punished by the courts and it will be a lesson to others that attacking Muslims is not the answers. All we can do now is hope that this will all pass over and we can move on.”

A Humberside Police spokesperson said tonight: “Police have arrested two people this evening, after an officer came across the fire at the Grimsby Islamic Cultural Centre on Weelsby Road, shortly before 10pm. The fire was extinguished and no one was injured as a result.

“It is too early to speculate why the fire was started, however, anyone with any information who could assist officers as part of the investigation are urged to call the Humberside Police non-emergency number 101, quoting log number 778 of 26/05/2013.

“The force is currently aware of a number of messages which have been posted on social networking sites by a small minority of individuals. These messages appear to be an attempt to incite trouble by posting messages inviting people to assemble and cause trouble at particular locations.

“Those people should be aware that we are monitoring these sites in Humberside and we will take action against those intent on attempting to incite violence or post messages of a racial nature.”

On Thursday, bricks were thrown through the windows of the mosque, landing just feet away from those inside, in an apparently racist attack.

That happened in the wake of the murder of Drummer Lee Rigby, in Woolwich, London. Community leaders joined together to condemn the incident, and the police confirmed they are investigating whether it was racially motivated. Eleven teenagers aged 16 and 17 were arrested.

Following the earlier attack on the mosque, tensions were further ratcheted up by the English Defence League, who staged a march through Grimsby yesterday. 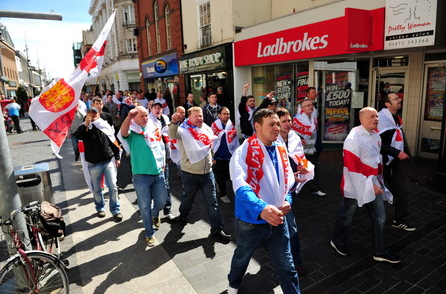