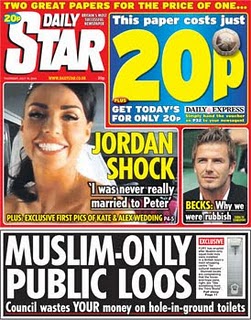 The ever-excellent Tabloid Watch draws our attention to yesterdays’s Daily Star, which reports that the Press Complaints Commission has upheld a complaint against the paper over its front page story, about a shopping centre in Rochdale installing “squat” toilets, which was headlined “MUSLIM-ONLY PUBLIC LOOS” with the sub-heading “Council wastes YOUR money on hole-in-ground toilets”.

As ENGAGE pointed out at the time, this non-issue, involving just two toilets in one shopping centre in Greater Manchester, was blown up into a major controversy by the Daily Express and other papers – and even by the BBC, who as ENGAGE observed “once again picked up on a non-story, utilised by the right-wing press to foment fear about the ‘Islamification’ of Britain”.

(The Daily Star followed up the story with another front-page article, based on information from an anonymous source that the toilets were being reconsidered, which was headlined “DAILY STAR BLOCKS MUSLIM-ONLY LOOS!” with the sub-heading “We get hole-in-the-ground toilets banned”.)

The PCC’s adjudication reads as follows:

“In this prominent story, there were two clear errors of fact which, in the circumstances, would have misled readers in a significant manner: the toilets could not be described as ‘Muslim only’; and were not paid for by the local council. While the newspaper had accepted that the article was wrong – and offered to correct the item – the Commission was particularly concerned at the lack of care the newspaper had taken in its presentation of the story. This led to a breach of Clause 1 of the Code which makes clear that newspapers must ‘take care not to publish inaccurate, misleading or distorted information’. The complaint was upheld.”

The Daily Star reports that the PCC “suggested the publication of the following correction on page 2, in addition to the removal of the article from its website: Our 15 July article said that squat style loos at Rochdale Exchange Centre were for Muslims only and were a waste of the council’s money. We are pleased to make clear that the loos may be used by non-Muslims and that they were paid for by the developer. The complainant asked for the newspaper to publish an apology.”

As Tabloid Watch notes, the Daily Star has yet to apologise. As for the PCC’s concern about “lack of care” on the part of the Star, Tabloid Watch says quite rightly that it “suggests this headline was, somehow, a mistake, rather than calculated to whip up resentment and hatred”.