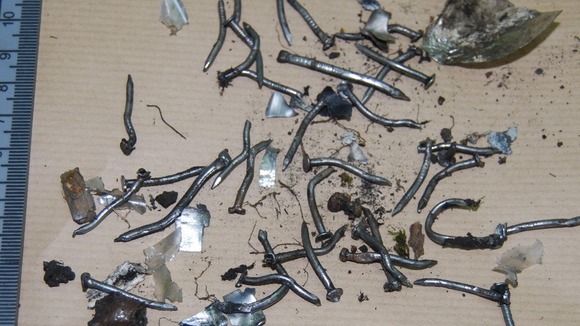 Pavlo Lapshyn had been in Britain for just five days when he murdered grandfather of 23 Mohammed Saleem by stabbing him in the back as he made his way home after Friday prayers. The 25 year-old white supremacist had moved to Birmingham where he had been awarded a placement to further his engineering studies.

Following his trial counter terrorism officers said that he had acted as a “lone wolf”. But detectives found literature and images related to PoU [the neo-Nazi paramilitary group, Patriot of Ukraine] and fascist Dynamo Kiev supporters on Lapshyn’s Russian Facebook page and on a pen computer drive when they raided the home he shared with a fellow student in Small Heath, Birmingham.

Investigations by counter terrorism officers found that Lapshyn was not a member of any of these groups and that no one else was involved in the murder of Mr Saleem, aged 82, or the bombs that were set off at three Midland mosques.

But Lapshyn was influenced by the ideologies of right wing extremists in Ukraine. Neo-Nazi literature and racist chants popular with Dynamo Kiev fans were among the disturbing set of literature found at his home in Small Heath, Birmingham.

After his arrest a team of West Midlands Police detectives were sent to the Ukraine where sources said he worked alone and was not affiliated to any groups.

A recovered camera memory card showed that Lapshyn had amassed 455 images and 90 videos of chemicals, guns and parts of explosive devices as he prepared for a bombing campaign. It also emerged that Lapshyn admired the Boston Marathon bombers and had downloaded images of the April 15 attack and its aftermath on to his computer.

Before leaving Ukraine Lapshyn practised blowing up trees. After he was sentenced video footage emerged of the PhD student blowing up trees as he experimented with bomb making in woods in the Ukraine.

He had apparently been planning his murderous bomb and knife campaign a year before he left for Britain. He had come to Birmingham after being awarded a one year placement with software design firm Delcam and had been staying in a company flat when he began his campaign of terror.

A police source said: “Lapsyn’s Russian Facebook page had numerous mentions and postings from Dynamo Kiev hooligans and the PoU especially in the run up to Euro 2012. The Ukrainian authorities were keen to downplay any links with extremist groups operating within its borders.”

He added: “It appears Lapshyn was moving within these neo-nazi circles for at least three years which is when he first came to the attention of Ukranian authorities after practising with explosives at his home.”

”Following our extensive investigations there is no evidence to support that Lapshyn was a member of any right wing group or that he was directed by any group and we want to reinforce that he acted alone. During our investigation Lapshyn’s computers were searched and extreme right wing literature was discovered, this demonstrated that he was influenced by this ideology but not directed by any group.”

In a statement, the Muslim Council of Britain said of Lapshyn: “There will be some who will view his activities as those of a lone wolf. But in a summer that saw an unprecedented rise in attacks on mosques and Islamic institutions, it is important for all of us to challenge anti-Muslim hatred, just as we challenge those who wrongly use Islam to carry out acts of violence.”

The PoU recruits and trains football hooligans to attack foreigners. The violent racism of the group caused players Theo Walcott and Alex Oxlade Chamberlain to withdraw from the England squad ahead of Euro 2012, hosted by Poland and Ukraine. The group is linked to far-right political parties in Ukraine and has formed alliances with white supremacist groups across Eastern Europe and Germany.

During raids at Lapshyn’s Small Heath flat police also found a chilling photo of Lapshyn posing with the hunting knife used to kill Mr Saleem, a grandfather of 23. Lapshyn stood holding the lethal weapon across his chest, apparently taking pride in what he had done. One picture showed a hunting knife with the caption: “Mohammed Saleem was stabbed by…”

Lapshyn admitted murdering Mr Saleem as he made his way home from praying at his local mosque in Small Heath on April 29 last year. The PhD student, from the city of Dnipropetrovsk, also set off bombs at three mosques in the Black Country while he was at large for the murder.

At the Old Bailey last month he admitted causing an explosion on July 12 near the Kanzal Iman mosque in Tipton, and engaging in conduct in preparation of terrorist acts between April 24 and July 18 this year including a failed bomb attack on a mosque in Wolverhampton.

Lapshyn hid a homemade explosive in a child’s lunchbox and left it outside a mosque in Walsall in June. He then set off a device near Wolverhampton Central Mosque and detonated a nail bomb in Tipton.

It was only because a service in Tipton had been put back by an hour that scores were not injured or killed. Three hundred people would have been in the path of the shrapnel that shot across the car park, leaving nails embedded in tree trunks. But the mosque had temporarily moved prayers back.

Sentencing the sick white supremacist Mr Justice Sweeney told Lapshyn: “You were motivated to commit the offences by religious and racial hatred in the hope that you would ignite racial conflict and cause Muslims to leave the area where you were living. Such views, hatred and motivations have no place whatsoever in our multi-faith and multi-cultural society.”

“the term ‘lone wolf’ is of limited value, and is best understood as highlighting a particular strand of violent extremism found in far-right cultures. It is less useful as a synonym for solo actor terrorism. Moreover, those who act alone are often supported by others, either tacitly though the creation of a wider supportive community promoting violence, or explicitly though providing materials useful for carrying out violent extremism. Though individuals may act solo, they are supported by a community. Consequently, any far-right violence carried out by solo actor terrorists is an extreme product of the wider cultural milieu of far-right activism.”