An anti-mosque protest which is due to be held in Lincoln in the New Year has been labelled as “destructive” by a local politician.

The East Anglian Patriots group, which demonstrated in the city in June, has announced it will return on Saturday, January 18. The previous rally attracted several hundreds of protestors in City Square.

The group says it is protesting about the building of a mosque on the site of the Old Dairy in Boultham Park Road.

But Councillor Brent Charlesworth, portfolio holder for social inclusion and community cohesion at the City of Lincoln Council, has told the group to stay away. “What we all don’t want is for outsiders to come here and cause upset in a city that has worked so hard to promote great community relationships,” he said.

“Thus, our collective attitude towards the visit of the East Anglian Patriots is quite simple: don’t come. We don’t want you here. You will serve no useful purpose. “We don’t want to prevent free speech but all of us do not want trouble.

“The last thing we want is trouble on our streets and this will only have an entirely negative, destructive effect on community relationships. We live in a peaceful, progressive city and we want to keep it that way.”

The anti-Islam group announced the protest on their Facebook page, which has more than 1,700 likes.

At the previous rally, police officers were drafted in from Nottinghamshire, Thames Valley, Northamptonshire and the Metropolitan Police to join their colleagues from Lincolnshire. No arrests were made.

A counter demonstration, similar to one held in June, will again be present in the city. Nick Parker, secretary of Lincoln & District TUC, has called on the public to unite against the East Anglian Patriots.

He said: “Local trade unions are totally opposed to the far-right East Anglian Patriots group. The EAP and other groups like to whip up racism and division among local communities and seek to blame Muslim people for the problems in our society.

“We call on working-class people in Lincoln to focus on what unites us – the need for a society that can offer us all decent jobs, homes, and public services – and reject the racism and community division that the far-right has to offer.”

Nobody from the East Anglian Patriots was available for comment.

The East Anglian Patriots have billed their protest as a “unity demo”, by which they mean that it aims to bring together different sections of the Islamophobic far right.

Although some English Defence League divisions have pledged their support, the advertised speakers represent elements who have split from the EDL – Paul Pitt (Prodromou) of the South East Alliance, John “Snowy” Shaw of the Infidels, Jason Lock (Will Anderson) of the English Volunteer Force and Tony Curtis, who appears to be freelancing these days.

The East Anglian Patriots outline their position on far-right unity and differences with the EDL leadership here. The “veterans” demonstration outside the Old Bailey that the Patriots criticise the EDL for not supporting was organised by the British National Party. 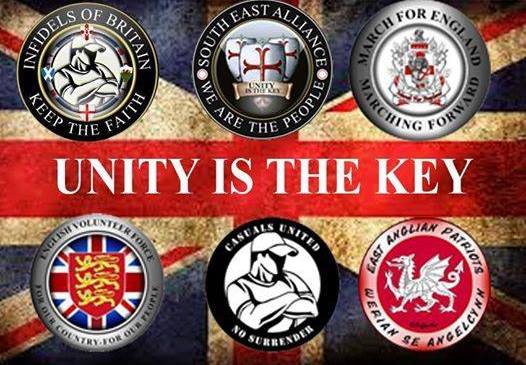