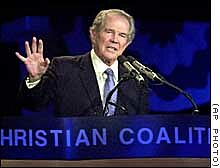 On the June 12 edition of the Christian Broadcasting Network’s The 700 Club, following a report on Muslims in Minneapolis seeking religious accommodations at school and work, host Pat Robertson stated, “Ladies and gentlemen, we have to recognize that Islam is not a religion. It is a worldwide political movement meant [sic] on domination of the world. And it is meant to subjugate all people under Islamic law.”

He characterized the American Muslim community as “Islam light” and went on to say Muslims “want to take over and we want to impose Sharia on you. And before long, ladies are going to be dressed in burqas and whatever garments they would put on them, and next thing you know, men are going to be allowed to have wife-beating and you’ll be beheading adulterers and so on and so forth.”