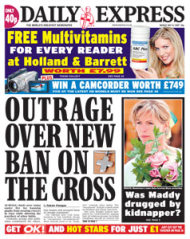 “School chiefs are today under fire for banning pupils from wearing crosses in class while allowing the jewel­lery of other faiths. Christian groups and politicians condemned the education bosses and accused them of ­’double standards’. The officials have told headteachers to ban jewellery except in ‘exceptional circumstances’ when schools need to be ‘sensitive’ towards other faiths. The ‘exceptions’ include lockets worn by Muslims and Hindu bracelets….

“A spokesman for the Lawyers’ Christian Fellow­ship yesterday said: ‘We have had numerous examples recently of the rights of some faith groups being tolerated while the rights of others, generally Christians, are not. Where rights are in competition, some rights win out. So we have a situation where gay rights trump Christian rights and in some areas, Muslim rights seem paramount’.”