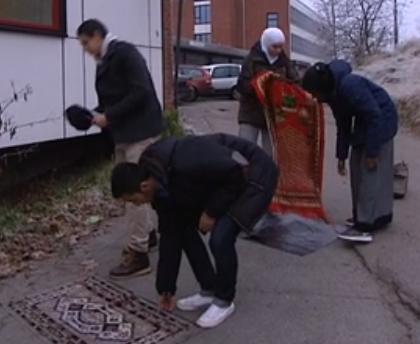 High school student Ibrahim El Kadi asked if he could pray while at school. “No,” said his principal.

He asked for a quiet prayer area “for all religions” and was quoted the Education Ministry’s official line. “No one has the legal right to religious practice during working hours, neither employees nor students.”

The denial compelled El Kadi and some 40 other students in “multicultural” Ulsrud High School to protest in mock prayer outside the school’s library. Now they pray in the bitter cold of a nearby parking lot.

The principal, for his part, said he had received complaints from students who felt “excluded” by the prayer. So, he told the Muslim students to leave and stop praying, although recess provided just enough time for prayer.

City schools committee councillor, Torger Ødegaard, told broadcaster NRK that quiet rooms for prayer are not a good idea. “School is not a religious institution. School is a knowledge institution,” Ødegaard told NRK.

Meanwhile, El Kadi and the Oslo school’s Muslim students said they won’t relent until they have a prayer space. “We’ll pray out here even if it snows,” said fellow student protester Aslihan Bozkurt.