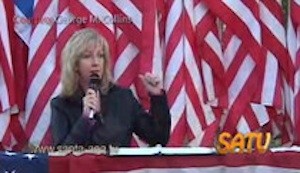 The longtime leaders of Orange County’s Republican Party were given a rude awakening in January when Villa Park Councilwoman, and self described “blended” Tea Partier, Deborah Pauly, bested establishment candidate Jon Fleischman in the election for first vice chair of the GOP Central Committee.

Just how rude this awakening could end up being for the party’s establishment became apparent in mid February when Pauly stood outside of a Muslim charity event in Yorba Linda and said to cheering protestors: “Make no mistake my friends, these who are assembling are enemies of America.” She added: “I know quite a few Marines who would be very happy to help these terrorists to an early meeting in paradise.”

Such vitriolic comments made by Pauly can be heard in a video put together by the Council on American-Islamic Relations (CAIR), that, in a matter of days, went viral.

Pauly’s actions touched a nerve in Orange County. Speakers at recent meeting of the Orange County Human Relations Commission claimed to have received death threats since the protest. And Pauly’s colleagues on the Villa Park City Council are in the process of drafting a statement to address her actions.

At least one major Muslim advocacy group has demanded that Orange County’s Republican party condemn the protest and comments from elected officials who were present. “Time and again Republican leaders have shown a lack of leadership and irresponsible behavior in upholding the oath that they took,” said Munira Syeda, a local spokeswoman for the Council on American-Islamic Relations. “It’s time for the Republican party to come out and say this is un-American.”