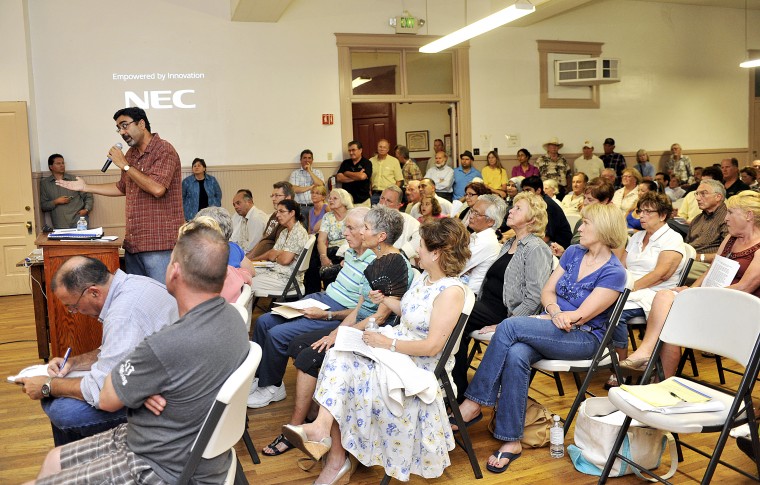 County staff began the meeting at the Grange Hall in Morgan Hill by announcing they decided since last week to recommend the planning commission postpone the project due to the high volume of concerns submitted by the public. While last week the staff recommended the commission approve the project when it takes up the issue Thursday, on Tuesday they said they will recommend the body continue the decision in order to allow further studies of the soil permeability and groundwater depth on the 15-acre San Martin site where the South Valley Islamic Center plans to build the Cordoba Center.

But when the meeting turned to the public comment period, in which nearly 30 audience members used their allotted three minutes to voice their objections, support or suggestions for the project, the meeting quickly grew boisterous and, at times, nearly out of control. Attendees shouted in argument from the audience against speakers whom they disagreed with, and applauded loudly with those they supported.

While Sal Akhter, SVIC member and Cordoba Center project manager, spoke as the last public commenter, the audience emitted a loud sustain of disapproval as he demonstrated the existing local presence of Muslim residents and activity in San Martin. Akhter was visibly and vocally upset at the reaction and many of the comments that preceded his, and directed his opinion to the audience rather than the committee.

“So much complaints and charges, I don’t where to begin,” said Akhter, who added he has lived in San Martin for 30 years. “We have followed every letter of the law, without a single request for a variance.”

Seated opponents of the project attempted to shout him down, particularly after he exceeded his allotted three-minute speaking limit and the committee allowed him to continue anyway. “Time!” numerous audience members repeatedly and loudly shouted at the expiration of the clock. Dozens intermittently screamed angry responses to some of his comments.

Committee members made little effort to calm the crowd and allow commenters to speak without interruption.

The audience was standing-room only in the 186-capacity meeting hall, with people spilling out two doors on either side.

Most were against the project, citing the groundwater issue as well as possible impacts on traffic, noise, storm water runoff and flooding, and the Cordoba Center’s capacity to serve local needs in accordance with the county’s general plan. Some speakers even expressed unabashed fear of the Islamic community who plans to make the Cordoba Center their worship headquarters.

The first speaker following the county staff presentation was Michele Rasner of Gilroy, who prompted obscenities and boos from the crowd as she declared that she thinks the controversy is about religion and discrimination rather than groundwater or traffic related worries. “Let us find similarities, not differences,” Rasner said.

When a female member of the SVIC addressed the committee next, grumbling moans emanated from the audience as she said, “This is about my civil rights and my children’s civil rights.”

Georgine Scott-Codiga, president of the Gilroy/Morgan Hill Patriots, said she and other residents are “afraid” of the project and they “don’t trust” county staff and county ordinances that will not prohibit construction of the mosque as long as the developer is in compliance.

Joy Schoming, a Gilroy resident, said she objected to the project’s name of Cordoba Center, which refers to an ancient Spanish city. To Schoming, the name also conjures up a Muslim community center formerly known as the Cordoba House that is under development in New York City, and which generated significant controversy when it was in the planning stages.

Schoming and others also worried about the possible noise impact from the facility, suggesting that calls for prayers at other mosques can be noisy. County staff said no amplified music or speech would be permitted to emanate from the site, and it would be subject to existing noise ordinances.

Other residents at the meeting, who are not affiliated with the SVIC, spoke in support of the project, and argued that it will serve the local community through education efforts, developing a clean and aesthetically pleasing facility, and preserving a large portion of open space on the site.

One man prompted applause from some audience members with comments that speculated the Cordoba Center might be tied to violent offshoots of Islam that promote terrorism.