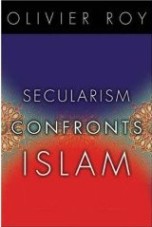 “Mr Roy argues that the ‘Islam’ depicted as incompatible with (indeed threatening to) modern Western secular society is a one-dimensional construct wholly at odds with the diversity of life experienced by real flesh-and-blood Muslims, including those living in the West. The defenders of laicité, in their alarm at a largely mythical Islam, sense danger at every bus stop.

“The wearing of the veil (seen, in the face of the facts, as involuntary) becomes an emblem of a deeply-laid plan of Islamic subversion. All arranged marriages are seen as forced marriages and therefore repressive. The ultimate aim of the well-known Muslim intellectual, Tariq Ramadan, is deemed to be to turn France into an Islamic state. The periodic riots in the Paris banlieues are seen as signs of Islamic revolt rather than social protest.

“Mr Roy rejects all of these contentions and, along the way, has some fun at the expense of those who have created an Islamic exception. Why attack only Islam as discriminatory? Should we not stigmatise the Catholic Church for not allowing women to be priests? Why not ask Jews to give up the notion of the ‘chosen people’? More seriously, he suggests it might be honest, though hardly honourable, to admit that Islam is singled out because it is the religion of immigrants….

“The relevance of all this goes well beyond France. Many in Europe, believing that multiculturalism in Britain and the Netherlands has failed, are wondering whether the stricter French were right after all. Olivier Roy’s cogent little book may give them pause.”