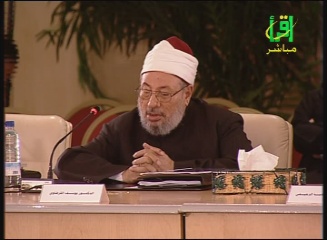 Under the headline “suicide bombs are a duty, says Islamic scholar”, Anthony Barnett claims that Yusuf al-Qaradawi “has said it is a duty of Muslims in Iraq to become suicide bombers”.

The report is taken from the Middle East Media Research Institute, which is of course notorious for producing selective translations designed to discredit supporters of the Palestinian cause. If you watch the video on MEMRI TV #822 you’ll see that it’s been carefully edited to bring out the points that serve MEMRI’s political agenda.

However, even judging by MEMRI’s selected extracts, it is clear that Qaradawi was responding to an earlier speaker who had, he noted, “stressed the legitimacy of defense, saying it is a legitimate right in Palestine and Iraq. I think that saying it is a legitimate right is not enough, because a right is something that can be relinquished. This is a duty. All scholars say that defending an occupied homeland is an individual duty applying to every Muslim”. So Qaradawi was clearly referring to the general duty to resist an occupying power, not to suicide bombings as such.

Qaradawi also reiterated his frequently stated view that these bombings are not in fact suicide, because the bomber “does not want to commit suicide, but rather to cause great damage to the enemy, and this is the only method he can use to cause such damage. Since this method did not exist in the past, we cannot find rulings about it in the ancient jurisprudence”. But that is rather different from arguing that everyone resisting Israeli and US occupation forces has a duty to become a suicide bomber.

Anthony Barnett’s confusion is due to the fact that MEMRI’s version of Qaradawi’s speech consists of three separate sections spliced together. There is an obvious splice after the section that ends “I am amazed by what Dr. Muhammad Rafat ‘Othman said” and before the next one, beginning “This has nothing to do with suicide”. There is no indication of this in MEMRI’s transcript of Qaradawi’s speech, which does not use ellipses, thus obscuring the editing that has taken place.

The (presumably intentional) result of this is to suggest that when Q was referring to resistance he was equating this with suicide bombing. Hence the Observer‘s headline stating that Q claimed suicide bombing was a duty.

However, MEMRI is at least prepared to admit that Qaradawi’s speech was delivered at a conference of religious scholars called to oppose terrorism – which is more than the Observer is prepared to do. (For a report of the conference, see Islam Online, 23 August 2005.)

Brett Lock is dead chuffed that the liberal press has uncritically reproduced MEMRI’s propaganda: “Well, this is progress! Finally The Guardian [sic – wrong paper, Brett] is reporting that Dr Qaradawi is indeed a supporter of suicide bombers.” (See Lock & Load blog, 28 August 2005.) But this is par for the course for Brett and his chums in Outrage!, who adopt material provided by right-wing Isamophobic bigots without a moment’s hesitation. And why not? They have so much in common.