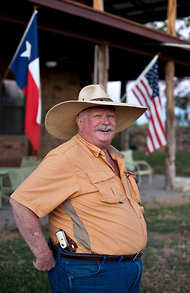 The New York Times reports on the case of Crockett Keller, the gun instructor who placed a radio ad for a concealed handgun class which told Muslims they wouldn’t be allowed to attend.

Keller asks: “Why would I teach people who have sworn the annihilation of the United States and who can lie, cheat, steal and murder Americans in order to further Islam? Why would I arm someone like that? Why would I enable them to carry a weapon legally?”

“Outside of looking at television, I doubt if he’s ever seen a Muslim”, Mustafaa Carroll of CAIR is quoted as saying.