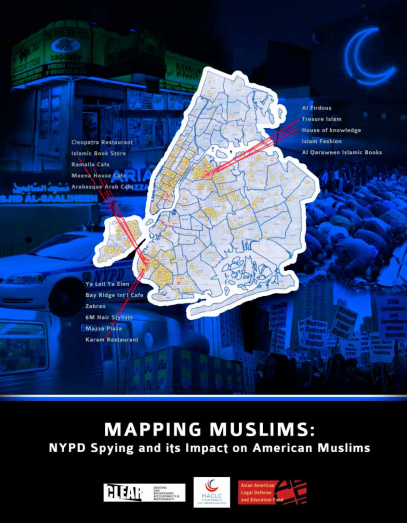 A new report released last week by a coalition of Muslim civil liberties groups paints a grim picture of the targeting of Muslims in the NYPD’s post-9/11 anti-terrorism surveillance operations.

The report, Mapping Muslims: NYPD Spying and its Impact on American Muslims, tells how the NYPD’s extensive surveillance – always in the name of national security – has created a climate of fear and distrust among Muslims, has had a chilling effect on their ability to worship freely at mosques, and has deterred organization around Muslim civil rights issues.

Report co-author Diala Shamas, an attorney with Creating Law Enforcement Accountability and Responsibility (CLEAR), said the research, which included 57 interviews with Muslims living in the New York City area, is a response to long held concerns that the NYPD is infringing on the constitutional freedoms of Muslims. “We wanted to show the community’s response to the NYPD’s claim that this surveillance is harmless,” said Shamas. (CLEAR is a project run out of the City University of New York’s School of Law.)

Among the report’s key findings: individuals reported heavy surveillance of the city’s mosques as places of suspected radicalization, which has made individuals wary when attending services; and the fear of being targeted by law enforcement has led to self-censorship and decreased involvement in community groups like Muslim Student Associations. A particular concern cited in the report is the department’s deployment of an unknown number of undercover informants throughout the city,. “You look at your closest friends and ask: are they informants?” said one respondent.