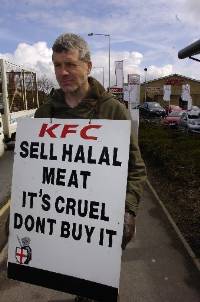 People campaigning against the trial of Halal meat at KFC restaurants held a protest in Colne on Saturday afternoon.

Mr Steven Smith, who campaigns against ritual slaughter, led a demonstration outside the KFC outlet at the North Valley Retail Park. Mr Smith, who lives in Burnley, joined four more campaigners to raise awareness and hand out leaflets about the controversial trial, being tested at 74 KFC stores nationwide.

He said: “It was a very successful demonstration and we had a number of people supporting us. We campaign against ritually slaughtered meat – Muslim Halal – which involves cutting the throat of animals and is a cruel method of killing animals. It can take up to four minutes for the animal to die, rather than them dying instantly.”

Nina Arnott, a KFC spokesman, added: “Our restaurants in Burnley and Colne are taking part in our Halal trial following great demand in the area. We’ve worked with the Halal Food Authority and animal welfare organisations to ensure our systems and processes fully comply with halal requirements while staying true to our strict standards of animal welfare, which have not been compromised as a result of this trial.”

The report fails to mention that Steven Smith is a veteran fascist and currently Burnley organiser for the National Front, who were behind the protest.