A vandal has been fined after spray-painting graffiti messages about the terrorist group ISIS.

Aryan Mahmood Ramadan, an Iraqi Kurd, was part of a group that scrawled the words ‘Turkish ISIS Supporters’ in yellow paint on the wall of a shop in Newcastle’s West End. It was one of three messages relating to the terrorist organisation that appeared on walls in the area last month.

Ramadan was caught on CCTV spray-painting the graffiti on the wall of Twana Kalil’s business on the West Road on October 8. The 25-year-old, of Prospect Place, Arthur’s Hill, Newcastle, pleaded guilty to one count of criminal damage and one of having an article with intent to destroy property at Newcastle Magistrates’ Court.

He also asked for a further count of criminal damage, also relating to spray-paint and ISIS-related graffiti, to be taken into consideration.

Neil Fodor, prosecuting, said the offence happened between 1.45am and 2am. He said:

“On the afternoon of October 8, the defendant bought spray cans from B&Q. He then left his address and met with friends and the group went out and, on Mr Kalil’s wall, wrote the words ‘Turkish ISIS Supporters’ in spray paint. Similar damage was caused at other sites in the area but the defendant is not charged with those sites.

“Mr Kalil gives a limited statement. He confirms there was damage to his business premises but doesn’t provide a victim personal statement. The taken into consideration offence is at a similar corner shop supermarket on the West Road and, again, the defendant is seen on CCTV when that took place.

“When interviewed, the defendant accepted his part in this. He also said he was there on other sites when others were causing damage. He was there but he was not causing the damage at those sites. The words used included reference to race and reference to organisations but the charge isn’t in terms of racially aggravated.”

Lewis Pearson, mitigating, said the message was politically-motivated, rather than racially.

He said: “Mr Ramadan is a Kurd from north Iraq. I will let that sit for a moment because we know what that means. There is a desperate struggle with ISIS, who are threatening their very existence.

“Added to that, you will remember that, on the border with Turkey, the Kurds were fighting ISIS without the support of their Turkish comrades. The words sprayed on the wall were political, rather than racial.

“Here we are in Newcastle seeing these awful events on our TV screens. We can imagine how it feels to be a Kurd from Iraq watching those TV screens. Mr Ramadan has been here seven years and he’s having to watch this awfulness happening to his people.”

The graffiti was quickly removed by Newcastle City Council.

Note that the Chronicle insists on using the ambiguous phrase “ISIS-related” to describe the plainly anti-ISIS graffiti. Considering that the paper was instrumental in encouraging the nonsense, eagerly seized upon by the far right, that the graffiti was pro-ISIS, you might have thought the Chronicle would be keen to clear up the confusion. But apparently not. As a result the far right are continuing to present the story as if it demonstrates support for ISIS among the local Muslim community. 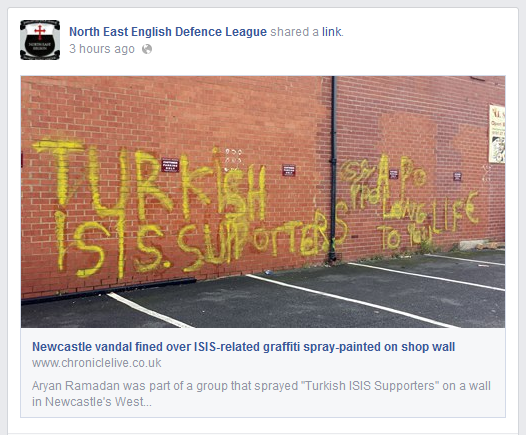