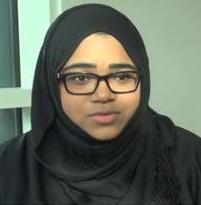 A Muslim nurse has spoken out after a religiously-motivated attack in the grounds of the Freeman Hospital. The incident happened in May 2013, just two days after the murder of drummer Lee Rigby, but Khadija Mohamed, 22, has now chosen to speak out.

She said: “I felt a tug on the back of my scarf and noticed I was on the floor. A middle aged man was standing over me saying ‘You’re one of them, you’re one of them,’ really aggressively.”

Khadija fought to free herself while passers by shouted at the man to leave her alone. She added: “I remember just being so scared, crying, shaking. It’s saddening that not even a Muslim, but a woman, can be attacked so vigorously in broad daylight. But I find it quite overwhelming that people thought to help me.”

Khadija fled to the bus stop and went home. She didn’t report the attack to the police or the hospital. She said: “At the time I didn’t really feel the need to because I’ve always felt so safe at the hospital. But the main purpose of speaking out now is so that people understand that Muslims are just regular people. We’re just regular human beings like everyone else.”