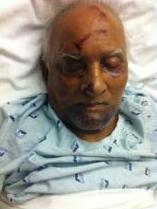 A brutal beating left a beloved grandfather in the hospital Friday night and police want to know if it was an act of hate.

The whole incident apparently started with a simple question and answer, but it ended with the victim bloody and bruised from head to toe. It happened just before 5:30 a.m. on Nov. 24 in Queens.

Ali Akmal laid in his hospital bed in critical condition with wounds and bruises covering most of his body. The 72-year-old was savagely beaten after he went out for his early morning walk on 46 Avenue in Corona last Saturday.

“They pretty much tried to kill him, with their hands, their own bare hands and maybe a bat, too. But they pretty much had the mentality that ‘Yeah we have to kill this person,'” the victim’s granddaughter told CBS 2’s Dick Brennan.

Akmal’s granddaughter did not want to show her face on camera because the attackers are still out there. Police said the suspects on seen on surveillance video running from the crime scene.

Akmal’s tongue was so badly swollen that he couldn’t talk for two days. When he finally could, he told police that when he first encountered the two men, they asked him, “are you Muslim or Hindu?”

He responded “I’m Muslim,” and that’s when they attacked. The beating was so savage and personal, Akmal was even bitten on the nose.

The crime has been assigned to detectives with the NYPD’s Hate Crimes Task Force.

Akmal was out of intensive care Friday, but not out of the woods. He cannot walk, can barely speak and is not always coherent, but his son-in-law said he’s lucky to be alive. “He’d been beaten, head, back, knees, they tortured him. In every single joint they hit him,” the son-in-law said.

Police said the suspects are both in their late teens or early 20s.