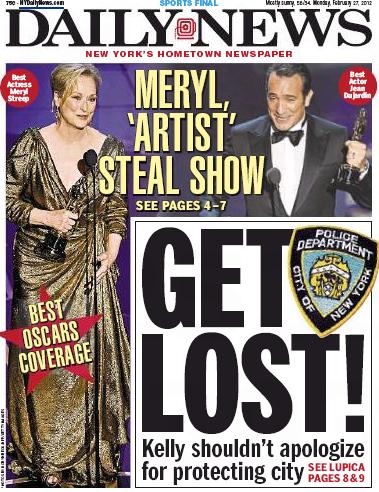 Bob McManus, editorial page editor of the New York Post, blasted the Associated Press on Tuesday, suggesting that the news organization cares more about winning a Pulitzer Prize than the threat of terrorism.

“It will win its prizes, or not,” McManus wrote. “But to the extent its activities undermine a great city’s will to protect itself from proven enemies, it may someday have much for which to answer.”

McManus’ attack was just the latest journalistic broadside against the news organization in response to its ongoing investigation of the NYPD’s widescale surveillance of Muslims in New York City, several neighboring states and on over a dozen college campuses across the northeast.

The Post and the Daily News, which slammed the AP during the start of the series last August, have defended the NYPD, while simultaneously taking shots at the news organization and those raising important questions about civil rights being trampled through a secret spying program.

On Feb. 19, Post columnist Michael Walsh described the AP’s reporting as a “journalistic jihad against the NYPD.” Last Wednesday, McManus’ editorial board described the AP as “see[ing] civil-rights violation lurking in every city shadow,” praisingSchumer’s support of the NYPD’s Muslim surveillance three days later. On Saturday, the Post ran an editorial cartoon where bomb-building Muslims call the AP to complain about the NYPD, withPost columnist Michael Goodwin writing Sunday that a “growing gang of loons, ideologues and dupes is lining up to take its whacks at the NYPD.”

That same day, the Daily News editorial board wrote that Christie and Booker “should thank the NYPD” and invoked the attacks on 9/11 as the reason the two New Jersey politicians are wrong to question the police department’s terror-fighting tactics, which it wrote the AP has “hyperventilated” about.

The Daily News followed up Monday with a front-page headline expressing the view of one of the paper’s best-known columnists, Mike Lupica: “Get Lost! Kelly shouldn’t apologize for protecting city.” Describing the NYPD commissioner as “the best the city has ever had,” Lupica scoffed at the idea that “Kelly is supposed to apologize to big New Jersey politicians because they don’t like the NYPD going over to Jersey and occasionally engaging in surveillance of Muslims.”

Update:  The Post has hit back against critics by publishing acomment piece by Qanta Ahmed headlined “Islam & the NYPD: Why we should cheer cops’ work”. There is of course a ready market for Muslims who are prepared to defend state repressiondirected against their own community.