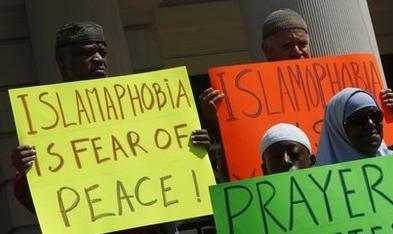 It is “unethical, insensitive and inhumane” to oppose the planned mosque near ground zero, more than 50 leading Muslim organizations said Wednesday as they cast the intense debate as a symptom of religious intolerance in America.

Leaders of the Majlis Ash-Shura of Metropolitan New York, an Islamic leadership council that represents a broad spectrum of Muslims in the city, gathered on the steps of City Hall to issue a statement calling for a stop to religious intolerance and affirming the right of the center’s developers to build two blocks north of the site of the 2001 terrorist attacks.

“We support the right of our Muslim brothers who wish to build that center there,” said Imam Al Amin Abdul Latif, president of the Majlis Ash-Shura. “However, the bigger issue and the broader issue is the issue of ethnic and religious hatred being spread by groups trying to stop the building of mosques and Islamic institutions across the country.”

This is the first time that the council as a body has spoken out on the weeks-old debate over the proposed center. “When the issue became hotter and hotter, and people made more statements against the mosques, then we decided to get involved in it,” said Syed Sajid Husain, secretary general of the council. He said the process of bringing together the leaders to agree on a statement also took a handful of meetings.

Leaders of the council said they were calling attention to what they claimed was an anti-Islamic climate, and that the development of a center near ground zero is simply one example.

They also cited a suspicious fire that damaged construction equipment at the site of a future mosque in Tennessee that is being investigated by the FBI, and the successful opposition to the proposed conversion of a property owned by a Catholic Church into a mosque and community center on Staten Island, a New York City borough off the southern tip of Manhattan.

Islamic leaders on Wednesday said they would support a move to another location, if that’s what the imam and his supporters choose to do. But they emphasized that Muslims also were killed in the terrorist attacks and were first responders.

“We declare unethical, insensitive and inhumane, the notion that our co-religionists are not entitled to the respect of a place of worship according to their faith, near the location where men and women of our religion worked, lived and died – just like other people,” the group’s statement said in part.

The group is not associated with the planned Islamic center but is representative of a significant number of New York Muslim leaders.