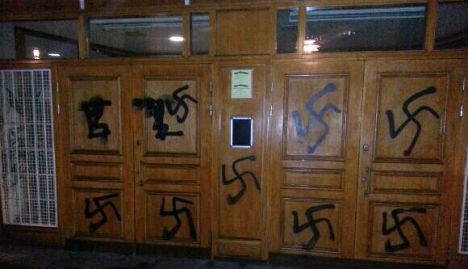 In the wake of several high-profile incidents, Muslim groups in Sweden plan to carry out a comprehensive survey of threats facing the country’s mosques.

The Muslim Council of Sweden (Sveriges muslimska råd, SMR) is concerned that several mosques and prayer centres have been vandalized and damaged in the last year, Sveriges Radio (SR) reports. There have also been several instances of threats and harassment.

“It’s only a matter of time until someone is seriously injured or dies,” SMR chair Helena Hummasten told the broadcaster. A study carried out five years ago by Mid Sweden University revealed that four out of ten Muslim congregations had been subjected to crimes, and Hummasten believes things have gotten worse since then.

In early January, the doors to the mosque in central Stockholm were covered in Nazi graffiti. In November, a window was smashed at another mosque in the Stockholm suburbs and pigs’ trotters thrown inside. And pigs’ heads were placed outside two different mosques in western Sweden last year.

Hummasten explained that many Muslim congregations are poorly funded and lack the money to secure their facilities. Visits to several prayer centres revealed a lack of emergency exits, and Hummasten fears that many of Sweden’s Muslims avoid visiting mosques out of fear that something will happen. “I know people who fear for their safety when they go to the mosque,” she told SR.

To help get a more complete picture of the threats facing Sweden’s mosques, Muslim faith groups plan to carry out a national survey of the situation that will also look at the safety of mosques and prayer centres.

The survey is to be funded by the Swedish state through the Swedish Commission for Government Support to Faith Communities (Nämnden för statligt stöd till trossamfund – SST), a state agency authority that provides financial support to recognized faith-based organizations in Sweden.