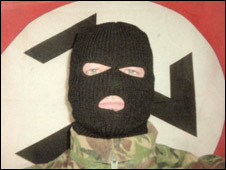 Neo-Nazi Martyn Gilleard has been found guilty of making bombs for a far-right terrorist campaign, after having previously admitted downloading thousands of images of child sexual abuse.

Police initially searched Gilleard’s flat in Goole, East Yorkshire, in connection with child pornography offences. But once inside the 31-year-old’s home, they discovered not just evidence of a paedophile, but the equipment of a potential terrorist as well.

Officers found machetes, swords, bullets, gunpowder and racist literature. Most sinister of all were four home-made nail bombs stashed under his bed.

He wrote of starting a “racial war” and murdering Muslims, but Martyn Gilleard boasted that he was no “barstool nationalist”. In a notebook recovered by police, Gilleard wrote that the “time has come to stop the talk and start to act”. And a jury has decided he truly did want to put his white supremacist views into action.

Gilleard, a forklift truck driver from Goole, East Yorkshire, admitted to police and the court that he had held racist views. At the time of his arrest he was a paid-up member of the National Front, the White Nationalist Party and the British People’s Party – all opposed to multiculturalism.

His computer password was Martyn1488 – the 14, according to prosecutor Andrew Edis QC, being a reference to the far-right’s “14 words” slogan, “We must secure the existence of our race and the future for white children.” The 88, Mr Edis added, represented the eighth letter of the alphabet – an abbreviation for “Heil Hitler”.

But Gilleard was not simply a passive crank, the court was told. In a notebook recovered by police, Gilleard wrote that the “time has come to stop the talk and start to act”.

“Unless we the British right stop talking of racial war and take steps to make it happen, we will never get back that which has been stolen from us,” he added. “I am so sick and tired of hearing nationalists talk of killing Muslims, of blowing up mosques, of fighting back, only to see these acts of resistance fail to appear.”