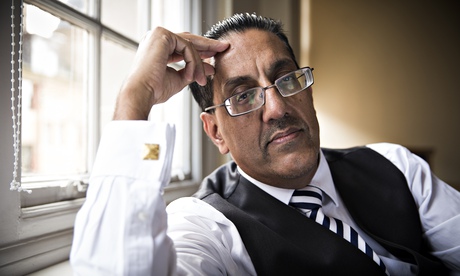 In the highly charged fallout from the Rotherham report, Nazir Afzal, the Crown Prosecution Service’s lead on child sexual abuse and violence against women and girls, tries to offer a calm perspective. Unruffled by mounting media hysteria over the ethnicity of abusers in Rotherham, he suggests stepping back and taking a wider view of the nationwide picture of child sex abuse.

His role means he has oversight of all child sex abuse cases in England and Wales. “So I know that the vast majority of offenders are British white male,” he says, setting the number at somewhere between 80 and 90%. “We have come across cases all over the country and the ethnicity of the perpetrators varies depending on where you are … It is not the abusers’ race that defines them. It is their attitude to women that defines them.”

Afzal, 51, is resigned to the ongoing scrutiny of commentators on the right towards the role of Asian men in recent grooming cases, but thinks that the focus is an overreaction. He is also wary of the suggestion found in the report, and reiterated by home secretary Theresa May on Tuesday, that a culture of “political correctness” had contributed to the authorities’ decision to turn a blind eye to the abuse of at least 1,400 in Rotherham.

“I don’t want to play it down. The ethnicity of these perpetrators is what it is. It is a matter of fact. It is an issue that has to be addressed by the state, and the authorities and the community – but it’s important to contextualise this,” he says, racing rapidly through his arguments, twizzling a paper-clip in his fingers in time with his swift delivery.

He notes that the amount of media attention devoted to child sex abuse cases is inconsistent. He led the legal teams that reopened and successfully prosecuted the Rochdale grooming case in 2012, over the abuse of 47 girls by a group of Asian men. “A few weeks after the Rochdale case, we dealt with a case of 10 white men in North Yorkshire who had been abusing young girls, and they were all convicted and they got long sentences. It didn’t get the level of coverage,” he says.

Where there is involvement of Asian men or men of Pakistani origin, he points to a practical, rather than cultural explanation – the fact that in the areas where grooming scandals have been uncovered, those controlling the night-time economy, people working through the night in takeaways and driving minicabs, are predominantly Asian men. He argues that evidence suggests that victims were not targeted because they were white but because they were vulnerable and their vulnerability caused them to seek out “warmth, love, transport, mind-numbing substances, drugs, alcohol and food”.

“Who offers those things? In certain parts of the country, the place they go is the night-time economy,” he says. “Where you have Pakistani men, Asian men, disproportionately employed in the night-time economy, they are going to be more involved in this kind of activity than perhaps white men are. We keep hearing people talk about a problem in the north and the Midlands, and that’s where you have lots of minicab drivers, lots of people employed in takeaways, from that kind of background. If you have a preponderance of Asians working in those fields, some of that number, a very small number of those people, will take advantage of the girls who have moved into their sphere of influence. It’s tragic.”

In the acres of coverage of this issue, few others have considered the possibility of such a pragmatic explanation for the profile of the abusers. Only Rochdale’s Labour MP, Simon Danczuk, has attempted a similar hypothesis, telling the New Statesman: “It’s a complex jigsaw and ethnicity is just one of the pieces. Class is a major factor, night-time economy is a factor in terms of this type of on-street grooming.”

Afzal is at pains to play down simmering racial tensions by providing a dispassionate picture of the broader context. “I don’t want this to turn into a reason to hate Pakistani and Asian communities because this is a very small minority of people within those communities who are offenders,” he says. “You should not taint the whole community by the actions of several dozen, a small minority of men. Criminality begins and ends with the criminal, and not collectively with the law-abiding communities.”

In the aftermath of the Rochdale trial, Afzal was disturbed at the way that some responded by muddling the actions of those prosecuted with their religious backgrounds. “There is a lot of criticism of religion – namely: ‘Is this a Muslim thing?’” He recalls how after the Rochdale case, someone called the Radio 4 Any Answers programme. “He said the Qu’ran supports paedophilia. I’m not paraphrasing, that is what he said. He wasn’t cut off, he was allowed to say all manner of things.”

“There is no religious basis for this. These men were not religious. Islam says that alcohol, drugs, rape and abuse are all forbidden, yet these men were surrounded by all of these things. So how can anyone say that these men were driven by their religion to do this kind of thing?

“They were doing this horrible, terrible stuff, because of the fact that they are men. That’s sadly what the driver is here. This is about male power. These young girls have been manipulated and abused because they were easy prey for evil men.”

But he recognises that this will be a difficult issue for the British Asian community for some time. “In one case I dealt with, a British National party member was convicted of child sexual abuse. The response of the BNP was to say that he was no longer a member. The British Pakistani community cannot do that about members of their community that are involved in abuse,” he says, pointing out that they do not have the same option of neatly removing membership rights from community members involved in abuse.

He says that he is unmoved by the current outcry (“I’m not interested in national outcry, I’m interested in protecting victims”), but believes if there are lessons to be learned from the Rotherham tragedy, they are less to do with the dangers of political correctness, and more with the need for a radical shift in the way that victims of this kind of crime are treated.

Afzal rejects the suggestion that no action was taken by officials “to avoid rocking the multicultural boat”, which has been the one thread of the Rotherham report widely seized on. This has “very little” to do with political correctness, he says, adding: “I’ve yet to hear personally a victim say the reason why the police weren’t interested was because of the colour of the perpetrator.” He concedes that some victims in Rotherham felt that this was a factor, but still argues that incompetence rather that sensitivity to multicultural values was the real problem.

Instead he believes that the cases were not pursued properly because “everyone involved was not as competent as they should have been. I can only speak for the cases I’ve dealt with, but it usually comes down to poor investigation; we didn’t investigate early enough. People have not been as good at their job as they should have been. They haven’t asked the right questions. As a result the victims did not have the confidence to come forward.”

He is disturbed at the number of times cases were dropped because police were concerned that they would be too difficult to prosecute because “the credibility of the young woman was damaged by her chaotic lifestyle”. Sometimes police would decide not to pursue a case because the victim had criminal convictions herself. “My view is that this is exactly what you would expect with a victim. That she has been led astray and manipulated by the abuser. He’s not going to look for the young girl who has never been in trouble. They deliberately target the ones who have the most chaotic backgrounds, the most troubled lives.”

Afzal’s focus on the need to improve the way victims are listened to chimes with the work being done by his former boss, the ex-head of the Crown Prosecution Service, Keir Starmer, who is working on how to reform a criminal justice system he describes as “barely fit for purpose”. Starmer is drafting a proposed victims’ law, that Labour has promised to pass if elected.

The legal system is itself guilty of wrongly classifying the victims of abuse as criminals. Even as recently as 2008, legal documents referred to children who were the victims of this kind of abuse as “child prostitutes”, he points out, “as if somehow what the children were doing was a lifestyle choice”.

Afzal has received criticism from all sides for his work in this area. Members of the Asian community have asked him: “‘Nazir, why are you giving racist or Islamophobes a stick to beat us with?’ My response to that is that we as a community should be carrying our own stick. Then there won’t be a reason for people to launch blanket attacks on the whole faith and the whole community.” He had hope for more “vocal” condemnation of the child sexual abuse scandals by the Asian community, as well as more support of his work combating “honour”-based killings and forced marriages – two other issues he has focused on in the past decade. “I do feel that there’s a deficit of leadership in some parts of the Muslim community. They could be much more challenging of certain behaviours,” he says, adding that this is the most effective way to counter the threat of Islamophobia. “The silence of people who may know something or have heard something only hurts our children.”

He has also been the victim of persistent threats and abuse from the far right, who for a while ran a letter-writing campaign to the prime minister calling for him to be sacked and deported. “I was born in Birmingham. They can deport me to Birmingham if they want to,” he says. “But I think if you are getting it from both sides, you are probably getting something right.”

This is a useful corrective to some of the nonsense that has been written about the Rotherham sexual abuse scandal, for example by Dan Hodges (“Rotherham child abuse: the liberal Left is circling the wagons over the race question”) at the Telegraph. The difference, of course, is that Nazir Afzal knows what he’s talking about, whereas Hodges is just an ignorant bigot.