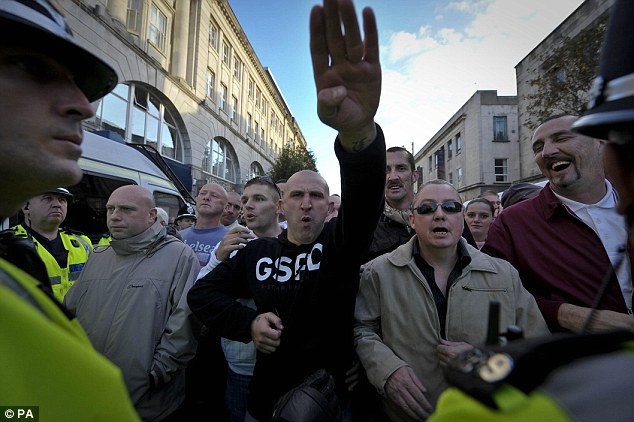 They denied being fascists ahead of their first Welsh march – but at yesterday’s Welsh Defence League protest against Islamic extremism onlookers were confronted with scenes of jeering men giving Nazi salutes. It was the first time the newly-formed group have been out on the streets in Wales.

The controversial march had sparked a counter-demonstration, with about 200 protesters occupying the city centre. A heavy police cordon on either side of Castle Street in Swansea city centre kept the two groups apart.

Speaking before its demonstration, the Welsh Defence League (WDL) said the event would be peaceful, and consistently denied allegations of fascist tendencies. But the ugly scenes, in which grown men among the group of around 60 were seen making Nazi salutes in front of small children, seemed to prove otherwise.

Keith Ross, one of the organisers of the counter demonstration by groups including Swansea City of Sanctuary and Searchlight Cymru, said: “My first reaction to the WDL is who are they defending us against? I don’t need to be defended against Muslims and I’m sad that the WDL has made a public call for no more mosques, which is a breach of human rights. Yet they have been given the right of freedom of speech.”

Plaid Cymru Assembly Member Leanne Woods was among those who had turned out to oppose the Welsh Defence League. She said: “This is the first time they have come to Wales and a lot of people from different organisations have come out to say far-right extremism isn’t acceptable on the streets of Swansea. We are happy to live together with the Muslim community and we are not prepared to accept divisive and hate-based politics on our streets.”

Dr Mohammed Rahman, who attends Swansea Mosque, said Muslims in Swansea were very much an accepted part of the community.

All in all, a total disaster for the few dozen WDL supporters, who were heavily outumbered by anti-fascists. 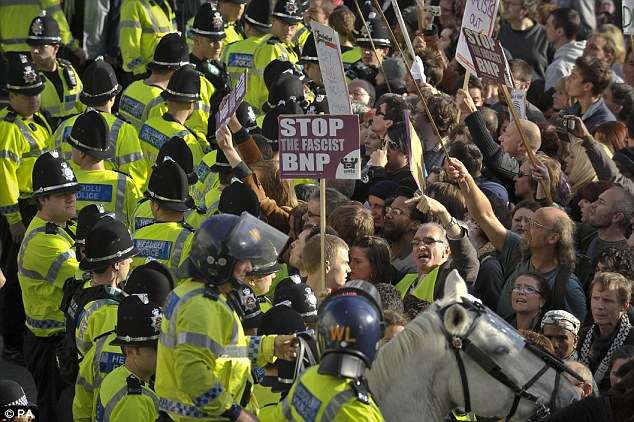