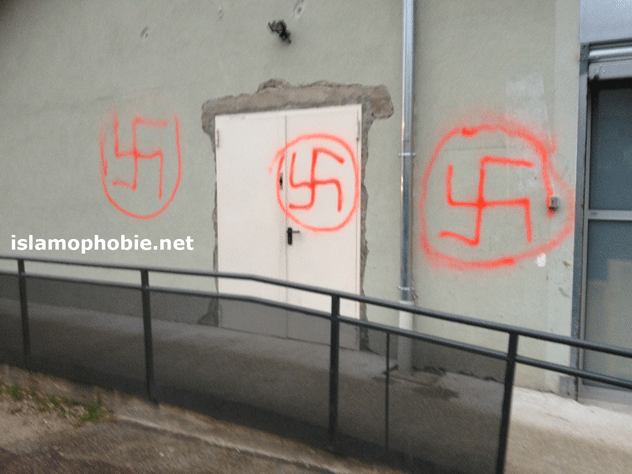 On Friday morning worshippers at the mosque in Voiron near Grenoble found that their mosque had been defaced with graffiti. Swastikas about a metre in diameter had been painted in red on the walls of the place of worship.

An attack aimed directly at the Muslim community, it triggered emotion and indignation. The Dauphiné Libéré quoted Lahcene Belkhobja, chairman of the association managing the mosque, as saying: “It is shocking, we do not understand the reasons for this gesture.” He told France 3: “Several mosques in France have recently suffered the same fate. Yes, I was shocked, but it is as if I was expecting it.”

The association has filed a complaint and an investigation will be opened, but the police have already indicated that they have little evidence to identify the perpetrators of this Islamophobic act. The swastikas have not yet been erased, as Lahcene Belkhobja wants everyone to see them and thus appeal to public opinion.

On Saturday fifty worshippers and inhabitants of Voiron gathered in front of the mosque to denounce these acts and express their support in the face of this attack.

The Collectif contre l’Islamophobie en France has forcefully condemned this gratuitous and cowardly act and reiterated the necessity of protecting all places of worship without distinction. The CCIF has also launched a petition calling for the establishment of a parliamentary committee on Islamophobia.

The CCIF points out that the Voiron incident follows similar far-right graffiti attacks on mosques at Contrexéville, Provins, Ozoir-la-Ferrière and Val-de-Reuil. 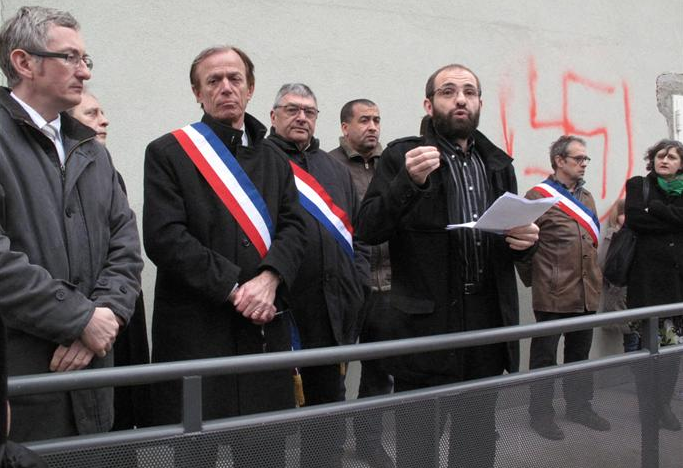 Yesterday’s demonstration in Voiron in support of the mosque