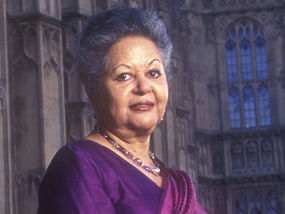 Baroness Flather of Windsor and Maidenhead became a heroine of the right-wing press earlier this week as a result of her speech to the House of Lords in support of the Welfare Reform Bill, where she accused some communities of migrant origin of exploiting the welfare state. She even argued that larger familes should be penalised by reducing child benefit payments for third and fourth children.

Shreela Flather told the assembled peers: “The minority communities in this country, particularly the Pakistanis and the Bangladeshis have a very large number of children and the attraction is the large number of benefits that follow the child. Nobody likes to accept that, nobody likes to talk about it because it is supposed to be very politically incorrect.” She went on to say that “Indians … do not have large families because they are like the Jews of old. They want their children to be educated. This is the other problem – there is no emphasis on education in the Pakistani and Bangladeshi families.”

That there was an Islamophobic undercurrent to Flather’s baseless claims about migrant welfare spongers, which are of course common currency on the racist right, was strongly suggested by the fact that she specifically exempted migrants from Hindu-majority India and attacked communities originating in two Muslim-majority countries.

In a comment piece published in the Daily Mail (where else?) Flather makes this accusation quite explicit, asserting that it is “some Muslims from these two regions” who “produce ever larger families in order to claim extra payments and publicly-subsidised housing”. She goes on to criticise the fact that a couple who have contracted an Islamic marriage abroad can claim benefits for their children, and adds: “But the state handouts do not end there, for under Islamic Sharia law, polygamy is permissible. So a man can return to Pakistan, take another bride and then, in a repetition of the process, bring her to England where they also have children together – obtaining yet more money from the state.”

An honorary associate of the National Secular Society, Flather regards herself as a cultural Hindu in much the same way that Richard Dawkins says he is a cultural Christian, though the term Flather prefers is “Hindu atheist”. Interestingly, this is the very same term that Vinayak Damodar Savarkar, founder of the (Hindu-supremacist, anti-Muslim) Hindutva movement, used to describe himself.

Only a few weeks ago we saw another NSS honorary associate, David Starkey, declaring that Enoch Powell was right. And now we have Shreela Flather ranting about about immigrants milking the benefits system. Will the NSS take any action against Flather over this? Don’t bet on it. The NSS president, Terry Sanderson, is on record as stating that “immigrants are importing their own brands of religion into Britain” which are “primitive, hysterical, fanatical and alien”. And he dismissed criticisms of Starkey on the grounds that there was nothing wrong with “voicing a well-intentioned but off-beat opinion in an important debate”.