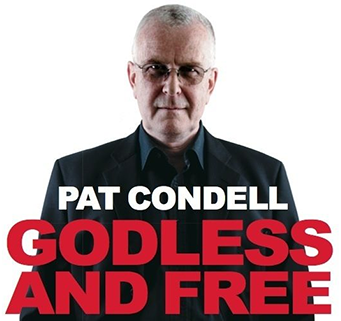 Partly that’s because I can’t stand the sight of his smug, sneering face staring out of the screen at me, but also because I get the impression that even the NSS’s enthusiasm for Condell has cooled somewhat in the face of the increasingly vile racist views he has promoted in his YouTube monologues. (Not that this has prevented another prominent fan, Richard Dawkins, from continuing to advertise compilations of Condell’s videos on his website.)

However, Condell’s latest video rant is worthy of note because, having previously announced his backing for the anti-immigration UK Independence Party, he has now gone one step further and come out in support of the English Defence League – to the delirious approval of the EDL itself, needless to say.

Condell says: “People keep asking me what I think about the English Defence League. So I went to their website and read it quite carefully, looking for racism and fascism of course, because the media keep telling me that they’re far-right. But I’m a little puzzled, because all I can find is a healthy regard for human rights, democracy and the rule of law. Not a whiff of racism or fascism, and not a hint of far-right politics of any kind. Am I missing something?”

Well, yes, just one or two things. First of all, it has long been obvious to anyone who isn’t entirely stupid that the official statements on the EDL’s website are intended to present a bland, sanitised and intentionally misleading picture of the organisation, its aims and its methods. Condell wouldn’t unthinkingly accept a religious organisation’s claims about itself without subjecting them to critical examination, but he’s quite happy to do that with the EDL.

If Condell had bothered to consult the EDL’s Facebook page, where the organisation’s rank and file have an opportunity to express their views, he would have found it presented a very different picture. Discussion threads there regularly descend into streams of racist abuse and threats of violence against Muslims. Here, for example, is a selection of comments posted after EDL co-leaders Stephen Lennon and Kevin Carroll spread the lie that Muslims in Oldham had celebrated Lee Rigby’s murder.

As for fascist links, they go right to the top of the EDL. Hel Gower, head of admin and PA to Lennon and Gower, has publicly advocated unity between the EDL and the British National Party, and has declared her support for both the BNP and the British First Party, the political wing of an openly Nazi group called the November 9th Society. Not that this would have worried Kevin Carroll – in the 2007 Luton council elections he signed the nomination papers for a BNP candidate who was also a supporter of N9S. Stephen Lennon, for his part, makes no attempt to deny that he is a former member of the BNP, and although he claims to have left the party in 2005 there is a photo of him at a BNP meeting two years later listening to a speech by veteran neo-Nazi Richard Edmonds.

Condell asserts that the EDL’s “demonstrations are always peaceful”. Again, you can only suppose that he has decided to close his eyes to the evidence. Violence has marked EDL protests since the early days of the movement, for example in Dudley in April and July 2010. Just recently, during their protest in Woolwich on 23 May, the EDL threw bottles and other missiles at the police, who responded with baton charges. Where they are not constrained by a heavy police presence, as happened in Dagenham in 2011, EDL supporters launch acts of thuggery against passing Muslims.

“Nobody is suggesting that the EDL doesn’t have its share of bad apples”, Condell concedes. Who these “bad apples” might be, and what criminal or otherwise reprehensible acts they may have carried out, he doesn’t bother to tell us. Perhaps he had in mind the EDL’s north east regional organiser Alan Spence, a former BNP parliamentary candidate who in 2011 was given a 7-month prison sentence for leading a violent attack on a left-wing meeting? Or maybe he was thinking of the succession of EDL supporters who have been charged with violence and online racist abuse following the murder of Lee Rigby? Condell doesn’t say.

Although he ignores all evidence of wrongdoing by the EDL, Condell does have a lot to say about the Socialist Workers Party’s mishandling of allegations of sexual assault. Indeed, it’s an indication that even Condell realises the weakness of his case in favour of the EDL that the major part of his monologue consists of abuse of the anti-fascist left, rather than a defence of the EDL itself.

Hope Not Hate – an organisation that has repeatedly (and mistakenly, in my opinion) drawn parallels between the white racist far right and extremist Muslim groupuscules, and whose former comrades at Searchlight have accused them of adapting to the Labour right – are a “jihad-supporting far-left hate group”, according to Condell. He declares that, rather than the EDL, it is the SWP and Unite Against Fascism who pose the real threat: “these are the people the police should be focusing on – the extreme nutcase fringe of the hard-left nutcase fringe, Stalinist wing”.

In his earliest atheist monologues Condell did at least give the impression of being a clever man whose views had unfortunately been warped by his hatred of religion. Since then things have gone downhill fast. Any signs of intelligent thought in his YouTube videos disappeared long ago, and these days all that remains is an ignorant bigot whose angry rants barely rise above the intellectual level of the racists and thugs for whom he now expresses such admiration.