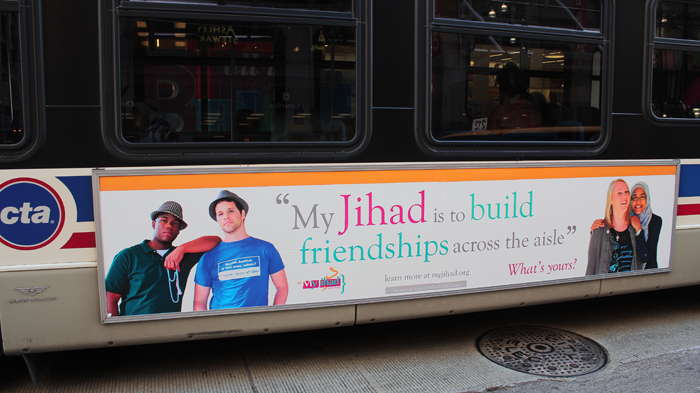 On Friday, December 14, the Chicago office of the Council on American-Islamic Relations (CAIR-Chicago) will announce the launch of the “MyJihad” educational campaign at a press conference in the morning and at a community party in the afternoon.

MyJihad is an independent national initiative that seeks to share the proper meaning of Jihad as believed and practiced by the majority of Muslims. Jihad is a central tenet of the Islamic creed, which means struggling uphill in order to get to a better place.

The MyJihad campaign was founded by CAIR-Chicago Executive Director Ahmed Rehab as an independent initiative, with initial sponsorship by CAIR-Chicago and with a view for various organizational or individual sponsorships in later stages. The campaign is expected to quickly take on a life of its own.

Volunteers working on the campaign include activists and students, but the majority of volunteers have come from a group of working mothers who are disturbed by the prospects of their children growing up in an environment of gross misinformation about Islam that sometimes spills into outright hatred, such as with the recent anti-Islam ad campaigns sponsored by hate blogger Pamela Geller

The MyJihad campaign includes putting up public ads on buses and trains, as well as a social media component on Facebook, YouTube and Twitter, where users are asked to tweet what their Jihad (struggle) is using the #MyJihad hash tag. Thousands of users have already tweeted and thousands more have liked the Facebook page.

“We have been overwhelmed with the participation of people of other faiths tweeting their struggles,” said campaign volunteer and Naperville mom Angie Emara. “People of different backgrounds are finding a common language, they’re learning to see themselves in one another as they share similar expressions of their daily Jihad.”

The group hopes to follow up on the Chicago bus ad campaign with similar campaigns in New York, Washington, D.C., San Francisco, Houston, and Seattle.

“Jihad is a term that has unfortunately been widely misrepresented by the actions of Muslim extremists first and foremost, and by attempts at public indoctrination coming from Islamophobes who claim that the minority extremists are right and the majority of Muslims are wrong. The MyJihad campaign is about reclaiming Jihad from the Muslim and anti-Muslim extremists who, ironically but not surprisingly, see eye to eye on Jihad. It is also about pushing for an intelligent and informed understanding of Islam and its concepts and practices in the media, the educational circles, and the public. Most of all, this campaign is about giving voice to our views, our practices, and simply put, our reality, a reality that is too big to be left out of the conversation.”