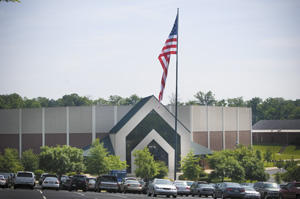 Former congressional candidate Lou Ann Zelenik said Monday she has found a place to hold a freedom conference after getting turned down by 20 hotels.

Cornerstone Church in the Madison community on Nashville’s northeast side agreed to hold the event, “The Constitution or Sharia Conference.” The event will be held at 10 a.m. Nov. 11. “There was no room in the inn for freedom, but pastor Maury Davis of Cornerstone Church opened his doors for free speech,” said Zelenik, who lost the 2010 Republican primary to U.S. Rep. Diane Black of Gallatin.

However, headliner Pamela Geller, who runs the Atlas Shrugs anti-Islam blog, has bowed out because the event is no longer at a secular venue. “While I have nothing against speaking in a church per se, I refuse to have my message driven from the public square,” she wrote in an email.

“It was a poor decision by Hutton Hotel when they changed their story three times from what they initially told me,” Zelenik said. “Our goal is to expose and disclose the differences between Constitutional and Shariah law. Our conference recognizes the freedoms of all Americans, including Muslim women, because they have equal protection under our Constitutional law. I reject Islamic Shariah for any woman.”

Zelenik also criticized Islamic Center of Murfreesboro member Saleh Sbenaty, who described the conference as “hate speech”. “Hate speech for what?” she said. “Does he hate our Constitution or does he hate Shariah law? I wonder how he would feel in Saudi Arabia or Egypt or Iran with constitutional law competing with Shariah? Anyone who would try to bring in constitutional law in these countries would be imprisoned and/or put to death.”

Sbenaty, who works as a 19-year professor at MTSU in the Engineering Technology Department, said he referred to the gathering as a hate group because he’s concerned with the reputations of the speakers Zelenik has invited.

“I’d like to ask her does she want to associate herself with those who inspired Anders Behring Breivik, who killed 93 people in Norway?” Sbenaty asked. “In his manifesto of more than 1,5,00 pages, he was inspired by the people she invited to this conference. He mentioned Robert Spencer and Pamela Geller. Why would we need these people who are coming here to town to preach hate?”

Cornerstone Church’s pastor Maury Davis is notorious for his series of lectures “Islam: The Evil Religion”, and in May this year the church hosted Geert Wilders. Just the sort of venue Geller would welcome an invitation from, you might think. Still, that will be one less speaker to incite hatred against Muslims in Nashville.