Muslims in a town in eastern France were shocked by a racist attack on their mosque which was sprayed with racist graffiti and defaced with pieces of pork.

The attack on the mosque in Toul is believed to have taken place in the early hours of Wednesday. It was daubed with inscriptions saying “France for the French”, “Here it’s Nazi” and “Don’t touch my pig,” along with Nazi swastikas.

“This is an act of cowardice,” said Nurdin Hamza, head of the local Maghrebi association. “Whether it is a mosque or a church, a synagogue, a Buddhist temple, or any other public place, we will always condemn this sort of act.”

Two youths in their 20s were arrested hours after the vandalism, French television said, giving no other information. According to the police, the youths were caught spraying swastikas onto the wall of a kebab restaurant in a nearby town.

Three skinheads aged between 19 and 20 with alleged far-right links have been arrested in connection with the mosque desecration. Two of them were apprehended while spraying swastikas and other Nazi symbols on a kebab restaurant in the nearby town of Liverdun. A third individual has been charged with assisting in the preparation of the attacks.

Maxime Rouvet and Sébastien Winwa each received 18-month suspended prison sentences for the attacks on the mosque and kebab restaurant, and were ordered to pay €25,000 in damages to the victims, of which €18,200 will go to the Muslim Association of Toul. A third man, Ludovic Bel, who bought paint used to spray the graffiti but did not participate in the actual attacks, was given a 6-month suspended sentence. 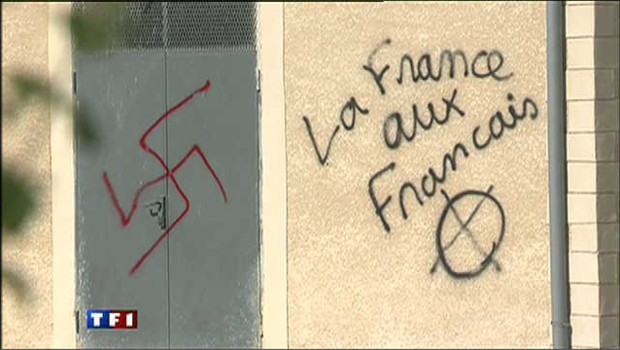