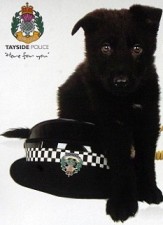 The choice of image on the Tayside Police cards – a black dog sitting in a police officer’s hat – has now been raised with Chief Constable John Vine.

The advert has upset Muslims because dogs are considered ritually unclean and has sparked such anger that some shopkeepers in Dundee have refused to display the advert.

See also the Daily Telegraph, whose readers helpfully draw out the subtext to this story:

“Why are the police apologising for doing their job. This is just another case of kowtowing to people who do not understand the BRITISH way of life.”

“Stop all this namby pamby nonsence. As you say the British are a nation of dog lovers…. We are British and this is Britain. If you don’t like it leave.”

“what next no pictures of pigs in the butchers! We are supposedly living in a multi cultural country, but it seems that we are dominated by the views of the muslims and their communities.”

“OMG, im sorry but if you dont like what people in OUR country do then go away.”

“Who cares what the Muslims think/say. Really, what are they going to do about it? It’s our culture, our traditions, our beliefs.”

“This is absurd. Why should Britons change their culture to accomodate Muslims? … This political correctness will cause the downfall of your society. What happened to majority rule?”

“If muslims don’t like dogs – or any other facet of our national characteristics – then they should bugger off to Iran or some other Islamic wonderland. When will we stop pandering to these barbarians? Why have we let them in to our country at all?”