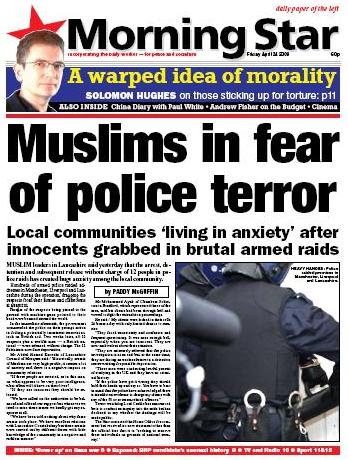 Muslim leaders in Lancashire said on Thursday that the arrest, detention and subsequent release without charge of 12 people in police raids has created huge anxiety among the local community.

Hundreds of armed police raided addresses in Manchester, Liverpool and Lancashire during the operation, dragging the suspects from their homes and classrooms at gunpoint.

Images of the suspects being pinned to the ground with machine guns pointed to their head were beamed around the world.

In the immediate aftermath, the government commended the police on their prompt action in foiling a potentially imminent terrorist attack on British soil. Two weeks later, all 11 suspects plus a twelfth man – a British national – were released without charge. The 11 Pakistanis now face deportation.

Mr Abdul Hamed Kureshi of Lancashire Council of Mosques said: “Historically, arrests of Muslims are very high profile, it creates a lot of anxiety and there is a negative impact on community relations.

“If these people are arrested, as in this case, on what appears to be very poor intelligence, what effect will it have on their lives? If they are innocent they should be released. We have called on the authorities to be balanced and offered our support but whenever we tried to raise these issues we hardly get any response at all.

“We have been told nothing about why these arrests took place. We have excellent relations with Lancashire Constabulary but these arrests were carried out by different forces with little knowledge of the community in a negative and ruthless manner.”