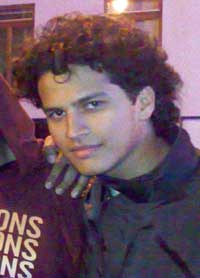 A teenage Muslim student was killed after he and his friends were attacked by a gang of drunken racist thugs, a court heard yesterday.

Mohammed al-Majed, 16, suffered serious brain injuries when he was punched in the face by George Austin. The blow sent him flying and he hit his head on the road.

Al-Majed, who was days from returning to Qatar after studying English here, was chatting with fellow foreign students outside a kebab shop when a group of young white men and women allegedly began taunting them.

Paul Rockett, 21, allegedly took a drunken swing at Mohammed’s 17-year-old black friend Peter Henworth after demanding: “Where are you from?” His attempted punch missed and Peter fled – as one thug yelled: “Come back here, you n****r,” the court was told.

Rockett and Quinn later told police that Mohammed’s friends had started the midnight fracas and claimed the students were a gang who were “trying to turn all the kids into Muslims”.