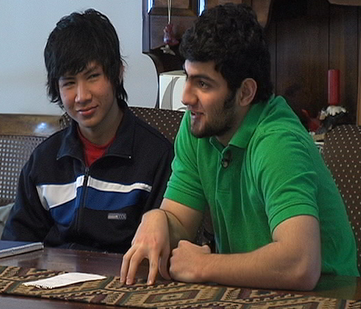 Two exchange students attending school in Perham, Minnesota say they were kicked out of a church there when they questioned a nationally known speaker who says “Islam equals terrorism.”

The boys were kicked out of the Assembly of God church in Perham during a question answer period following a speech by Walid Shoebat. Shoebat says he is a former terrorist, and claims to be an anti-terrorism expert. He now calls Islam the devil and tours the country speaking to churches and schools – even collecting fees from Homeland Security.

CNN has exposed Shoebat, calling him a fraud. Today, the DC based Council on American-Islamic Relations contacted WDAY and said it is calling for a meeting with Assembly of God church leaders in Perham, in hopes of strengthening interfaith relations and promoting understanding.

The two teenagers are Muslim, and attended the event featuring Walid Shoebat, a Muslim turned Christian.

Fikri, from Indonesia, and Elshan, from Azerbhjan, came to the United States as exchange students. Their home right now is Perham, Minnesota and host Mary Anderson. When the students heard that Walid Shoebat was speaking at a public forum at Assembly of God in Perham, they wanted to go.

Shoebat is known as a former Muslim, now Christian, speaking out against Islam.

Elshan Mirzazade – Perham Exchange Student: “Our message is not to argue with him, but to say to people that what he says is wrong.”

The boys heard what they say are mistruths and distortions coming out of Shoebat. So, during question and answer time they questioned Shoebat, and quickly were told to leave.

Fikri Rahmat – Perham Exchange Student: “I would conclude in my mind that he got mad because maybe he was afraid of the truth. One of his companions came to us and said, ‘Out, Out,’ rudely to us.”

Elshan Mirzazade: “They ushered us out and asked us to leave and we said, ‘OK, OK.’ So when I was leaving, I shouted, ‘Good way of promoting peace, bravo, bravo.'”