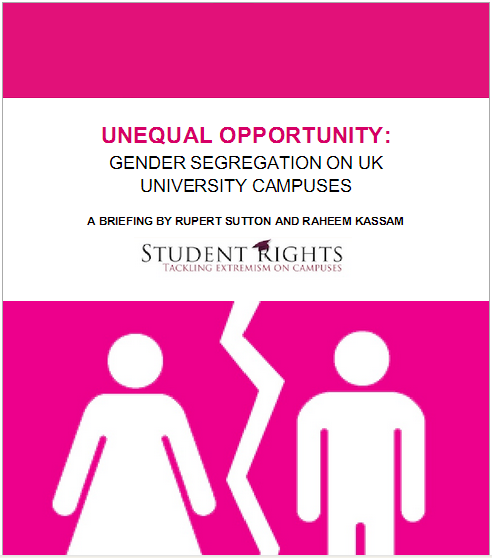 Muslim students have lashed out at claims in a study that extremists are segregating and denigrating women, saying they are being “increasingly demonised”, while the NUS has condemned it as a “witch hunt”.

The study by Student Rights, which links extremism with gender segregation on campus calling it a “serious issue”, has been slammed by one anti-racism student officer.

Mohamed Harrath, a student union executive at the London School of Economics, told Huffington Post UK the pressure group was trying to “ramp up” the effects of Islamophobia on Muslim students.

“Organisations such as Student Rights, supposedly a ‘non-partisan’ group, have continuously sought to ramp up fears of ‘extremism’ having a detrimental impact on the welfare of Muslim students. [The groups] feed into a pernicious campaign which increasingly demonises [Muslim students], contributing to a climate of fear and suspicion of Britain’s 100,000 Muslim students who work tirelessly to build more inclusive and respectful campuses.

“There is only one voice that is speaking about extremism on campus and it completely distorts everything. Other voices must be heard.”

Harrath highlighted the need for a “legitimate voice” for Islamic students, “rather than keeping silent and being demonised by someone else”. The second year government and economics student criticised the idea university campuses are “hotbeds of Islamic extremism”.

“We would welcome an open and balanced discussion about gender issues and religion but it’s important that contributions aren’t hysterical and that the word ‘extremism’ isn’t thrown around without justification,” he said.

“Unfortunately this report appears to conflate events organised for women to meet separately with those where genders are forced to sit separately. When events are open to the general public or student population forced segregation is entirely unacceptable, however where the event is closed and all those present have agreed to segregate, they should have the freedom to make that choice.

“A witch hunt which makes sweeping judgments about student Islamic societies without knowing the details denies the women involved the very equality it claims to wish for them.”

Mercer added the NUS was not aware of any complaints made by students to universities or student unions about gender segregation.