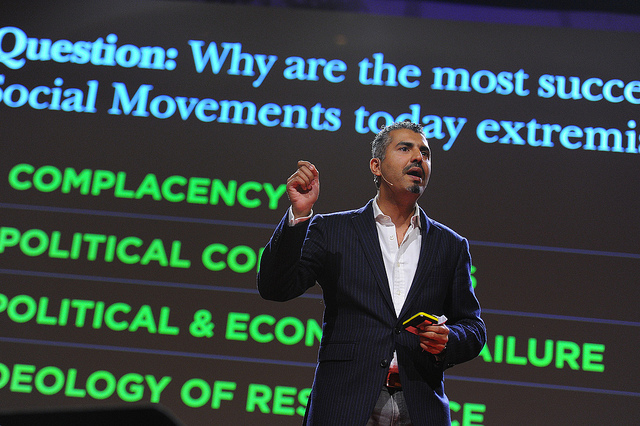 An interesting feature of the recent controversy over the so-called “Muslim patrol” in Tower Hamlets was that some of those you might have expected to seize on the case as an excuse for a bit of anti-Muslim scaremongering balked at resuming their campaign against the Islamist menace on the basis of such flimsy evidence.

Ted Jeory of the Sunday Express admitted that he had suffered the “uncomfortable experience” of agreeing with Islamophobia Watch that the issue had been “blown out of all proportion”, in a way that “would only serve to inflame the far right”. And nobody familiar with Jeory’s journalistic record could accuse him of failing to hype up the mythical threat of Islamism in east London. Even theTelegraph‘s Andrew Gilligan, of “Islamic Republic of Tower Hamlets” notoriety, claimed that he was offered the story but “didn’t use it because I wasn’t sure whether a few kids on YouTube had national importance”.

As a result the story was broken by The Commentator, a hardline right-wing blog linked to the neocon Henry Jackson Society, which has an established record of whipping up Islamophobia. It was immediately taken up by the mainstream right-wing press, including the Mail and the Sun. Trevor Kavanagh contributed a comment piece to the latter paper in which he denounced the supposedly widespread problem of “hooded gangs” who “roamed Muslim-populated suburbs ordering women to cover up and confiscating liquor”. Kavanagh went further, warning Sun readers that “thousands of young British-born Muslims have been radicalised – some of them trained in bomb-making and terror tactics in the badlands of Pakistan”, and he threw in a reference to Mali and Algeria for good measure. At Kavanagh’s hands, “a few kids on YouTube” had become part of the “global threat” of al-Qaeda-inspired terrorism.

Perhaps the Murdochs were so impressed by Kavanagh’s attempt to portray the “Muslim patrol” stunt as part of an international terrorist movement that they thought the same message should be conveyed to readers of one of their more upmarket publications. At any rate, yesterday the Times published an equally ludicrous article by Maajid Nawaz of the Quilliam Foundation under the heading “Muslim patrols are a sign of things to come”. Not content with describing the isolated actions of a few deluded Muslim youth in Tower Hamlets as comparable to “Hitler’s Brownshirts”, Nawaz went on to claim, on the basis of no evidence whatsoever, that there was a real danger that their ranks might be augmented by Islamist fighters returning from Syria – “the Muslim patrols could become a lot more dangerous and, perhaps willing to maim or kill if they are joined by battle-hardened jihadis”. Faced with such idiocy in what purports to be a serious newspaper, you can only rub your eyes in disbelief.

Nawaz’s motive for promoting this nonsense isn’t difficult to identify – he makes a good living out of wildly exaggerating the role of marginal groups of Islamist extremists and then presenting Quilliam as the only organisation with the specialist knowledge required to counter them effectively. But here he surely runs the risk of reducing himself to an object of ridicule, even among those who share much of his anti-Islamist world-view.

However, this didn’t prevent the Telegraph from publishing a report based on the Times piece in which Nawaz’s fantasies were uncritically repeated (“Muslim patrols could become more prevalent and more violent, warns anti-extremist”), and this report was in turn reproduced at Harry’s Place. When even the likes of Andrew Gilligan and Ted Jeory have recognised that association with the “Muslim patrols” hysteria would further damage their own already limited credibility, you can only conclude that other sections of the Islamophobia industry have entirely taken leave of their senses.

Muslim patrols are a sign of things to come

On the streets of Greece supporters of the far-Right Golden Dawn party patrol neighbourhoods, attacking anyone who looks like an immigrant. In Denmark a group calling itself Call to Islam has declared parts of the country to be “sharia-controlled zones” and its “morality police” confront drinkers and partygoers. In France right-wing vigilantes ran Roma families out of a Marseilles estate and burnt down their camp. In Spain nine Islamist extremists recently kidnapped a woman, tried her for adultery under sharia and attempted to execute her before she managed to escape. And here English Defence League thugs march in towns and cities “reclaiming” the streets from Muslims.

Something very worrying is spreading across Europe. Fascists and Islamist extremists alike are copying what Hitler’s Brownshirts excelled at – enforcing with threats and violence their version of the law in neighbourhoods. And the moderate middle is left gawping.

In Britain “Muslims Against the Crusaders” have recently declared an Islamic Emirates Project. They are seeking to enforce their brand of sharia in 12 British cities, naming the two London boroughs of Waltham Forest and Tower Hamlets among their targets. Little surprise then that in these two boroughs “Muslim patrols” have taken to the streets and begun enforcing a narrow view of sharia over unsuspecting locals.

Petrified Saturday-night revellers have been stopped by hooded thugs in these so-called Muslim areas, who warn them that alcohol, “immodest” dress or homosexuality are now banned. To add to the humiliation of being threatened, all this is filmed and uploaded on to the internet. Now some shops in East London no longer feel free to employ uncovered women or sell alcohol without fear of violent reprisals.

While this street-level problem festers across Europe, al-Qaeda and its affiliates are busy capitalising on the chaos of the post-Arab Spring world. Syria, Libya, Mali and Somalia are being ravaged by jihadist outfits, and all of them are attracting European-born Islamists seeking the thrill of real combat.

British jihadists with South London accents have already been documented as shooting the British journalist John Cantlie in Syria. Scores of young European-born Arabs and Somalis are following in the footsteps of British Pakistanis in travelling to lawless conflict zones. What happens when these men, schooled in the use of political violence in far-flung places, return to Britain?

Five men have been arrested for assault, but the Muslim patrols could become a lot more dangerous and, perhaps willing to maim or kill if they are joined by battle-hardened jihadis. The killing last year of Osama bin Laden was hailed as a milestone in defeating al-Qaeda. President Obama was keen to portray himself as having severed the head of the snake. But no one man ever controlled this loose movement. And while it may lie dormant for a few years in different parts of the world, there are plenty of committed grassroots ideologues to ensure that will rise again. And worryingly, the Islamist world view is an entrenched default position even among many non-devout British Muslims.

I fear that the Muslim patrols are a sign of things to come. As Syria becomes the new Afghanistan, we should prepare for the blowback from a new wave of extremists.

The Government has a sensible policy to challenge extremism at home and abroad. It has committees, partnerships and policy papers all in place that understand the need to build cohesion at the national level and root out extremism in local communities. But very little has actually happened at the grassroots. I struggle to see initiatives that inoculate young Britons against extremist messaging.

The longer we stand by and watch the far Right and Islamists impose their dogma on our streets, the more the extremes will become mainstream for a rising new generation.