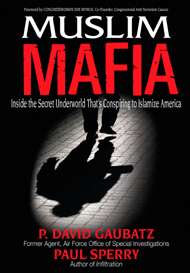 A conservative author whose book was touted just last month by four Republican members of Congress is explicitly calling for a “backlash” against American Muslims in the wake of the Fort Hood shootings.

Dave Gaubatz, author of Muslim Mafia: Inside the Secret Underworld that’s Conspiring to Islamize America, made the comment in a semi-coherent interview with the group Family Security Matters.

“Politicians, Muslims, and law enforcement are concerned about a ‘backlash’ against Muslims. Now is the time for a professional and legal backlash against the Muslim community and their leaders. Muslims know what materials are being taught in their mosques and they know many of the materials instruct young Muslims to kill innocent people who do not adhere to Sharia law. If Muslims do not want a backlash, then I would recommend a ‘house cleaning’. Stack every Saudi, al Qaeda, Pakistani, Taliban, Hamas, and Muslim Brotherhood piece of material from their mosque and have a bonfire. Tell the American, Jewish, and Muslim community this hatred will no longer be allowed in their mosques.”

All of this might be dismissed as the ranting of a fringe lunatic, but for the fact that Gaubatz’s work has been circulated and endorsed by prominent Republican officials.

Update:  Cf. this interview with one Bryan Fischer of the American Family Association who rejects a backlash against Muslims “just because they’re Muslims” but adds: “We should not allow Muslims to serve in the US military and we have got to raise questions about whether we can afford to allow Muslims to immigrate into the United States at all.”