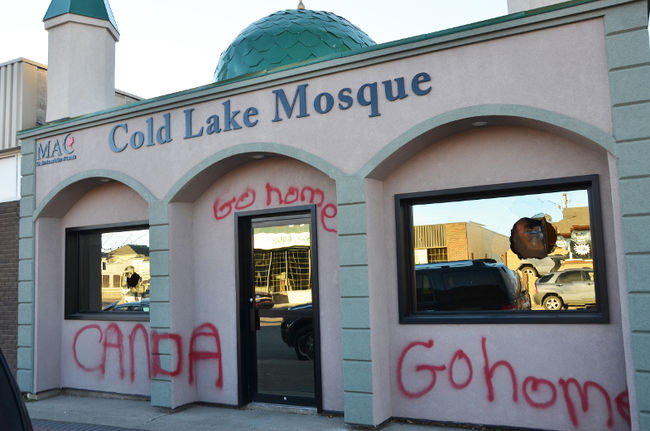 The prime minister has not publicly uttered one word of support for Canadian Muslims following the incidents, which Harper and the RCMP have labelled acts of terrorism. He’s remained silent despite an apparent backlash against Muslims , including the defacing of a mosque in Cold Lake, Alta., racist slurs against Muslim candidates in Toronto’s municipal election and threats against the B.C. Muslim Association.

In the latest incident, windows were smashed early Friday morning at the Assunnah Muslims Association mosque in Ottawa. Mosque president Mohammed Mostefa believes the vandalism was “probably” in response to last week’s incidents: the hit-and-run murder of a soldier in Quebec and the killing of an honour guard at the National War Memorial by a gunman who then stormed the Parliament buildings.

“Our leaders have a very important role to play,” concurred Amira Elghawaby, human rights co-ordinator for the National Council of Canadian Muslims. “It’s the leaders who have to set the positive tone.”

Immediately following the 9-11 terrorist attacks in New York and Washington, Elghawaby noted that then-prime minister Jean Chretien visited a mosque “just to show Canadians that there’s no such thing as collective guilt.” She said her group expects Harper, “as leader of our country, to speak up for the minorities that live here.”

“He has a responsibility to represent everyone and certainly Canadian Muslim communities are extremely worried about a backlash and I think that needs to be spoken to.”

Alia Hogben, executive director of the Canadian Council of Muslim Women, said it’s “very disheartening” that Harper has not bothered to speak out against the anti-Muslim backlash. But it’s not surprising to her. “I don’t think he much likes Muslims,” Hogben said.

Canada is a multicultural country with over 1 million Muslims, most of whom are Canadian citizens whose religion is only part of their identity, she pointed out. “I think it’s absolutely vital that the head of the country, like the prime minister, would accept that and also somehow reinforce it and reassure people.”

Asked why Harper has not specifically denounced any of the recent anti-Muslim incidents, the prime minister’s spokesman Jason MacDonald said: “These acts are obviously unacceptable. “That’s why our government has issued statements, like the one issued by (Multiculturalism) Minister (Jason) Kenney last week, among others, condemning this vandalism.

“The prime minister has been clear that our full attention is on radicalized individuals, jihadis and anyone else who seeks to harm Canada or Canadians, including Canadian Muslims.”

Kenney last week issued a written statement condemning the vandalism of the Cold Lake mosque as “a cowardly act” that “has no place in Canada.” He said Canadians “will not stand for crimes of intolerance and bigotry against anyone.”

In the House of Commons last week, after being questioned on the matter by a Liberal MP, Foreign Affairs Minister John Baird also condemned the “despicable” vandalizing of Muslim municipal candidates’ campaign offices in Toronto.

Liberal Leader Justin Trudeau, on the other hand, has acknowledged the concerns of Canadian Muslims more than once since the shootout on Parliament Hill.

In a televised statement that night, he directly addressed “our friends and fellow citizens in the Muslim community,” saying that Canadians know acts of violence “committed in the name of Islam are an aberration of your faith.” Trudeau repeated that message the next day in a speech in the Commons and during a visit Friday to a mosque in Mississauga. He also issued a statement condemning anti-Muslim vandalism.

NDP Leader Tom Mulcair issued an open letter to the Muslim community several days after the Parliament Hill shootout, promising that New Democrats can be counted on to fight racism and “Islamophobia” and to stand up for human rights.

“As we struggle to comprehend these terrible events, we stand shoulder to shoulder with our Muslim brothers and sisters. We are all Canadian and we have all been profoundly touched by this tragedy,” he said in the statement.

Mulcair also took to social media to denounce the vandalism at the Cold Lake mosque, issuing several tweets on the matter.

In both cases, the killers were Canadians with an alleged history of drug addiction, mental illness and admiration for extremist Islamic terrorists who’ve been on a brutal rampage in Iraq and Syria.

Muslim groups have condemned the killings and the extremist beliefs which apparently motivated them. But they say their efforts to demonstrate that most Muslims do not share those beliefs and to show solidarity with non-Muslim Canadians need to be reinforced by political leaders, particularly the prime minister.

“We are trying to work together with our law enforcement and our authorities to end this what is called radicalization of youth. We are trying to do our utmost to help,” said Mostefa.

But when political leaders denounce Muslim extremists but don’t come to the defence of moderate Muslims, Mostefa said young Muslims will think: “This is my country and you don’t come to my support to stand by my side.” And that sends “the wrong message.”

Mostefa’s mosque issued a statement Friday urging all elected officials, from the prime minister to municipal councillors, to denounce acts of hate against Canadian Muslims.