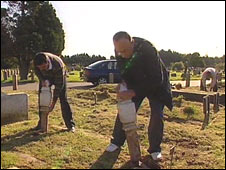 Nearly 40 Muslim graves have been vandalised at a west London cemetery.

Several headstones were damaged or pushed over, and flower pots and ornamental fencing were broken at the cemetery in Bridge Road, Southall.

Most of the vandalism is in the Muslim area of the cemetery, but there is also damage to the Christian area, a Metropolitan Police spokesperson said. Police are treating the incident as racially motivated, although no-one has been arrested.

The discovery was made after Muslims had finished praying all night for Layat Al Qadr, one of the holiest evenings of Ramadan.

“Pillars that have been embedded four feet in the ground have been uprooted, said Dalawar Chaudhry from the Central Jamia Mosque. “This has been a calculated attack. Glass smashed all over the place, two inch thick marble stones have been smashed in two with sheer determination.”

Muslim community leaders said it was possible the incident was timed to coincide with Ramadan. “Because this was the month of Ramadan we had a special evening the previous day and so I think it may have been targeted for that specific reason,” said Javed Mirza from the Muslim Funeral Society.