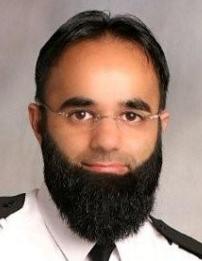 A Muslim police officer claims he was forced out of his job by colleagues who made fun of his beard and called him a “f***ing Paki”.

PC Javid Iqbal, 38, said white officers openly discussed in front of him how they were “better” than their ethnic-minority colleagues. The married father of two also claims officers pulled faces at each other if told they had to go out on patrol with him and forced him to walk home from a job instead of picking him up.

Mr Iqbal says he was sacked after fellow-officers in Luton launched a “smear and witch-hunt campaign” during which they lodged a string of complaints about his performance. He is taking the Bedfordshire force to an employment tribunal claiming he is the victim of racial and religious discrimination and unfair dismissal.

Mr Iqbal, who was born and raised in Stevenage, Hertfordshire, told the Daily Mail: “My beard is an important part of my identity which helps other Muslims relate to me. I am disgusted that I was bullied by other officers because of my beliefs. I became a policeman because I believed in putting something back into society. I have found that institutional racism is still very much around.”

And how does the Mail choose to headline this report of serious allegations of racial harassment in the police force? “Muslim PC sues after workmates ‘laughed at his beard’.”