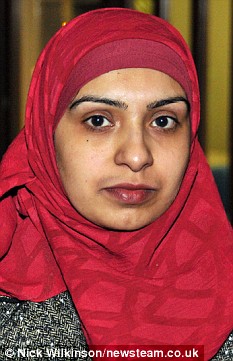 Saleca Faisal-Parkar, 31, was harassed, overlooked for jobs and training and was even branded “lazy” after she became seriously ill while pregnant.

The abuse was led by Stephen Jones, then head of litigation at the leading law firm Shakespeares, who also referred to her as a “flipping nun”. He was also a deputy district judge and a member of the Solicitors Disciplinary Panel, but has resigned both positions in the light of the scandal.

Mrs Faisal-Parkar, who has a young daughter, joined Shakespeares in 2002 as a legal assistant. Not long after she started, she found out from a fellow worker that she had been nicknamed “Mother Teresa” because she wore a hijab, which covers her head.

Over the course of the following months, she said Mr Jones – who made the derogatory comments in emails – harassed her, refused her training requests and potentially reduced her annual salary increase by the type of work he gave her. In one email he says to a colleague: “From where I sit tent ‘ead looks like a flipping nun today unless there are auditions for the Sound of Music on somewhere?”

Mrs Faisal-Parkar told The Daily Telegraph: “It was the worst experience of my life; it was just one thing after another. It had a terrible effect on my life at a time that should have been my happiest, getting married and having a baby. To this day I don’t know what motivated Mr Jones to treat me like he did, but I’m glad now he’s been shown up to be the sort of man he was.”

Mrs Faisal-Parkar, from Great Barr, West Mids, accepted an out of court settlement at the beginning of a three-day tribunal in Birmingham. Mr Jones has been demoted and fined a five-figure sum by the company.