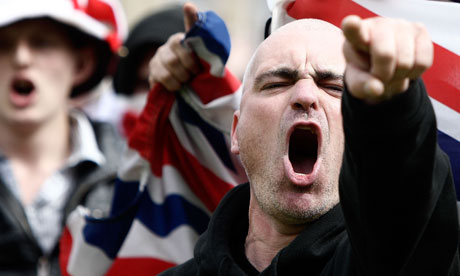 A Bristol MP has written to police and the council urging them to scrap plans to allow a march by right-wing extremists to go ahead on the same day as the city’s Pride march.

The English Defence League (EDL) is allegedly planning on holding a march in Bristol on Saturday, July 14 – the same day as the city’s annual Pride celebrations.

Kerry McCarthy, MP for Bristol East, has said “many LGBT people will feel intimated by the proposed march and people will inevitably stay away from what is suppose to be a family friendly event”.

Some 400 people have now signed an online petition calling for the EDL march to be banned, stating: “The EDL must not be able to bring their message of hate and division to places where diversity is a strength not a weakness.”

The Bristol march is one of seven events the EDL have pencilled in for the summer across the UK.

Ms McCarthy has said that while she has “every confidence” in the police’s ability to deal with both events, she is not satisfied that public order will be maintained after the march.

She added she is “deeply troubled” that people’s personal safety will be put at risk following the event which celebrates the city’s lesbian, gay, bisexual and transgender population.

“I am deeply troubled that the EDL have been allowed to march on the day our city comes together to celebrate diversity at Bristol Pride,” she said. “I know many LGBT people will feel intimated by the proposed march and people will inevitably stay away from what is suppose to be a family friendly event.

“Last year’s pride was a huge success, people from all backgrounds, faiths, races and sexualities came together in what was an inclusive and carnival like atmosphere. Sadly this is now at risk and I am concerned by reports that Pride organisers are now under pressure about whether or not go ahead with the event this year.

“The EDL’s reputation for Islamophobia, intolerance and public disorder runs contrary to what Pride and vast majority of decent Bristolians stand for. We know from their previous demonstrations in towns like Luton that EDL marches place a huge burden on the Police and can lead to violence and intimidation.

“For me this is not an issue about the freedom to protest, but a matter of public safety. The clash of these two quite contradictory events on the same weekend will put our city under enormous pressure and could put public safety at risk. For this reason I have written to the Police and Bristol City Council to express my profound concern and to request that they reconsider their decision to allow the EDL to march on July 14.”

Her call was backed by councillor for Bedminster Mark Bradshaw. “I ask the police to think again about allowing the EDL to march in Bristol,” he added. “For this to happen on the same day as Bristol Pride makes a mockery of the celebration of diversity and inclusion that is Pride.”

Update:  The EDL now say they are prepared to hold their demonstration on another day that doesn’t clash with Bristol Pride. And a Green councillor has come out against a ban on the EDL’s march on the grounds that “freedom of expression and of protest is a human right and it must be defended”.

Update 2:  The EDL have changed their minds again and say they do intend to march on 14 July.