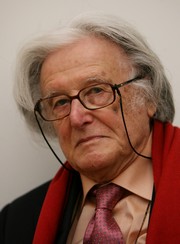 The building of huge mosques throughout Germany is nothing short of a “a bid for power and influence, a land grab”, according to Ralph Giordano, 85, the German Jewish writer and Holocaust survivor, in an interview with The Times that is likely to stir Muslim anger.

The comments from Mr Giordano came as the Muslim community of Cologne – about 120,000 strong – prepared to lay the foundation stone for yet another giant mosque, one of more than a hundred that are being planned or built across the country. Barely six weeks ago another mosque, capable of accommodating 1,200 worshippers, was opened in Duisburg in the nearby Ruhr region of northwest Germany. Spiky minarets are starting to punctuate the German urban skyscape – and the rumble of discontent from non-Muslim Germans is growing louder. One result is that the issue of immigration seems sets to be on the agenda in the general election next year.

“When I first saw the blueprints for the grand mosque in Cologne, I was shocked,” said Mr Giordano, who is now very active in the campaign against Turkish mosque-building. “It sent a completely wrong signal, it was a bid for power and influence, a land grab, not a place of prayer, so I told the mayor: Stop this mosque now!” That was in a public discussion that was filmed and placed online. The result was, he says, an avalanche of many hundred of supportive letters. “They all struck the same note: Mr Giordano we are afraid as you are of this creeping Islamification but we can’t say anything in public because we will end up being branded as neo-Nazis.”

Fritz Schramma, the Mayor of Cologne, argues that the mosque will become a tourist attraction and that it will be integrated into the urban culture. “It’s not right that Muslims should have to pray in old factory warehouses,” he said.