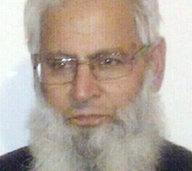 One of two Ukrainian men being held over bomb attacks near three mosques has been further arrested on suspicion of murdering a 75-year-old man.

West Midlands Police said the arrest was in connection with the killing of Mohammed Saleem [pictured] on 29 April. They said the man, 25, was being held over “a further act of terrorism”.

Mr Saleem died after being stabbed in the back in Green Lane, Small Heath, in Birmingham, on his way home after attending prayers at his local mosque.

His funeral took place at the Green Lane Mosque in Birmingham on 13 July. It was delayed because two post-mortem examinations had to be carried out.

Two Ukrainian nationals, aged 25 and 22, have been detained by detectives investigating explosions at mosques in Walsall, Wolverhampton and Tipton between 22 June and 12 July.

Police said Mr Saleem’s family had been informed of the latest development in the inquiry.

The stabbing of Mr Saleem was described by detectives at the time as a “despicable” attack on a defenceless pensioner.

Earlier on Saturday, counter-terrorism officers were given more time to question the Ukrainian nationals in connection with the explosions. Westminster Magistrates’ Court granted officers up to seven days to quiz the men.

They were initially detained on suspicion of being involved in the commission, preparation or instigation of an act of terrorism.

Mr Beale said: “We continue to investigate the circumstances surrounding the three explosions and are appealing to anyone who may have seen anything suspicious around these dates to contact us.

“We do not underestimate the impact this will have on communities across the West Midlands. The support of all communities has been fantastic with wider faith communities coming together to show solidarity.”

No one was injured by any of the explosions.