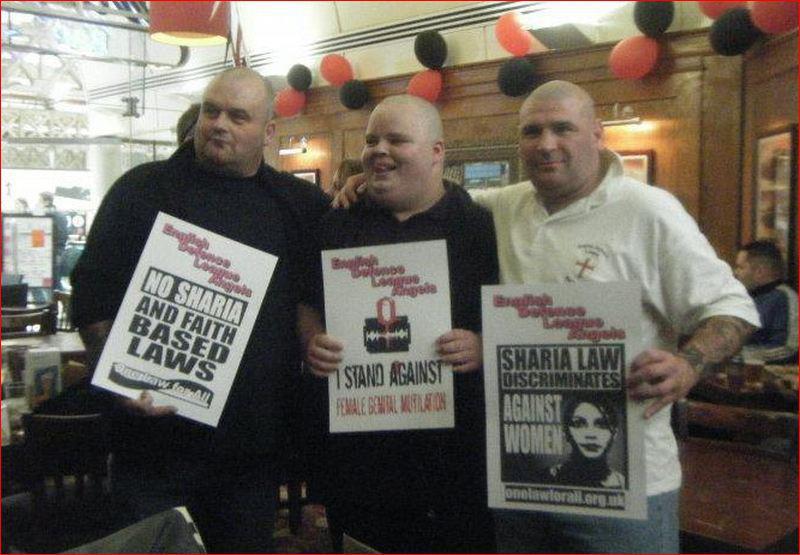 This photograph from the EDL protest last Saturday has been widely circulated around the internet, with comments mainly focusing on the disparity between the EDL’s claim that the event was organised by “Angels” and the physical appearance of the individuals in the picture. However a more sigificant aspect of the photo is the placards they are holding, two of which jointly promote the EDL and the One Law For All campaign.

The EDL/OLFA placards were displayed prominently on the demonstration itself (see here, here and here). This not the first time that publicity for the One Law For All campaign has featured on a far-right protest – one of their placards was seen last year on an English Nationalist Alliance march – but it is certainly unprecedented for OLFA’s logo and slogans to appear on propaganda material produced by the far right.

It is no secret that the EDL holds a favourable view of OLFA. Earlier this year they issued a statement appealing to OLFA to take its rightful place in the “counterjihad” movement alongside the EDL:

“We do not believe everything that One Law for All stands for, they clearly object to at least some of our positions. However, that does not mean that we cannot work together. It does not mean that we cannot put them in touch with some of our allies overseas who they might be more comfortable working with. It is important that One Law for All puts itself into a position to influence the global Counterjihad by contributing thought provoking ideas that expand its perspective and provide it with new approaches and thus alternative ways to solve the problems at hand.”

Taking the charitable view, it seems unlikely that OLFA agreed to the EDL adapting its propaganda for use on their placards. The cranky far-left sect the Worker Communist Party of Iran which is behind OLFA has no problem working with hardline right-wing Islamophobes – Geert Wilders’ admirer Baroness Cox is one of OLFA’s prominent supporters – but they draw the line at cooperating with the EDL. The OLFA publication Enemies Not Allies states clearly that they oppose the EDL as a racist movement led by fascists. Perhaps it might be a good idea for OLFA to issue a public statement condemning the EDL’s use of their name?

OLFA and the WPI might also ask themselves why it is that an organisation of racists and fascists shows such enthusiasm for OLFA. The answer of course is that OLFA’s hysterical anti-Sharia campaign stokes the fires of Islamophobia and helps to provide the conditions in which thuggish far-right movements like the EDL can thrive and grow.