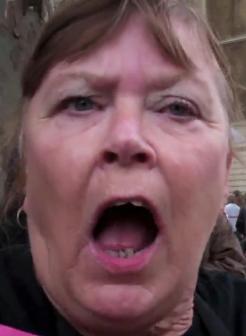 A video report of Saturday’s English Defence League and Unite Against Fascism demonstrations features Hel Gower, head of the EDL’s admin team and PA to the leadership.

Interviewed as she and her colleagues hand in their “EDL Angels are not sick” petition at Downing Street, Gower repeats the official line that the EDL’s women members are “wives, mothers, grandmothers, aunts”. This is no doubt true, but it doesn’t prevent the laughably misnamed “Angels” from also being racists and neo-Nazis.

Here for example is a comment from a Facebook discussion by Hel Gower herself replying to a critic who opposed the anti-Muslim bigotry displayed by Gower and others:

And from another Facebook thread here is Gower announcing her voting intentions:

The British First Party is the political wing of an openly Nazi group called the November 9th Society – the date being a reference to Hitler’s 1923 Beer Hall Putsch or to Kristallnacht in 1938, or very likely both.

Only last week Stephen Lennon declared that the EDL’s attitude to racists was that “we find out who they are and we kick them out”. And last month the EDL assured us that “neo-Nazis are not welcome at EDL demonstrations, and will be ejected whenever they are identified”. So far, however, no action has been taken against the racist, Nazi-sympathising Gower. On the contrary, she acts as an official spokesperson for the EDL.