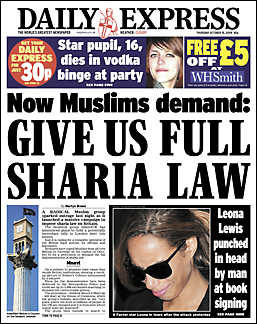 A radical Muslim group sparked outrage last night as it launched a massive campaign to impose sharia law on Britain. The fanatical group Islam4UK has announced plans to hold a potentially ­incendiary rally in London later this month. And it is calling for a complete upheaval of the British legal system, its officials and legislation.

Members have urged Muslims from all over Britain to converge on the capital on October 31 for a procession to demand the full implementation of sharia law. On a website to promote their cause they deride British institutions, showing a mock-up picture of Nelson’s Column surmounted by a minaret.

Plans for the demonstration have been delivered to the Metropolitan Police and could see up to 5,000 extremists marching to demand the controversial system.

In other words, yet another attempt to misrepresent the minuscule al-Muhajiroun sect as having significant support among the Muslim communities. “Up to 5,000 extremists”? Give us a break. Anjem Choudary will have difficulty organising a demonstration that even reaches three figures.