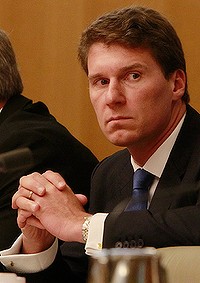 The Liberal senator accused of supporting a self-confessed Islamophobic Dutch politician has asked a Sydney Muslim to “publicly denounce” fundamentalist Islam before he corresponded with him.

Arch-conservative South Australian senator Cory Bernardi has been under fire from moderates in his own party for extending an invitation to visit Australia to Dutch politician Geert Wilders.

Yesterday, more evidence of Senator Bernardi’s anti-Islamic views were revealed when the online Muslim forum muslimvillage.com published a letter from the senator to a Sydney Muslim.

Senator Bernardi was responding to concerns expressed by the man about his comments regarding Islam. In the letter he declared Islam had been linked with hate speech, terrorism, gang rapes, racism, segregation and isolationism.

He wrote: “You have identified yourself as an Australian Muslim. I would be interested to know if you subscribe to fundamentalist Islamic practices. If not, I ask then for evidence that you have publicly denounced the above mentioned practices and the preachers who advocate for non-engagement of Muslims and ‘infidels’.”

The Sydney man replied and listed types of extremism associated with other religions.

On August 12, Senator Bernardi wrote another letter stating the man was ”incapable of critically analysing the actions of Islamic fundamentalists”. ”In the absence of your condemnation, one can only conclude you agree with their conduct.”